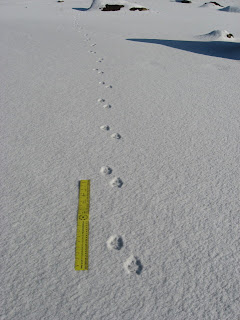 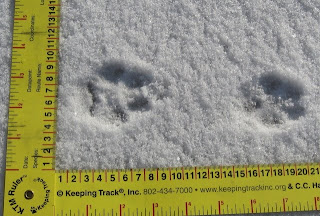 Janet writes: Recently, I was reading about trail patterns, and learned
about a not very common one that I thought I had seen a few years ago.
However, at the time I misinterpreted it. So I dug up the photos to
take another look. Here are two of them.

You'll recognize from the close-up that the tracks are those of red
fox. Many of you will also recognize that the trail pattern photo shows
that in the foreground the fox was using the side trot. Then, about
three quarters up the photo, the gait changes to something new, which
the fox holds for at least a few strides. That's the one that confused
me when I first saw it a couple of years ago. The order of tracks
remained the same as in the side trot: front-hind-front-hind. What
might that second pattern be?

Posted by The Nashaway Trackers at 8:50 PM