Lars was out on Flagg Hill Pond, Stow MA skiing this morning.  I found a long otter trail going over the ice and then returning, leaving many otter slides. A coyote track followed the trail.  The otter trail went to a beaver lodge, ducked under the ice, caught a fish, ate it on the shoulder of the lodge (second photo), and left.  Not 50 feet away, I found the coyote trail widen into a roll site, with the tasty fish head the coyote found. Just had to roll in it.... 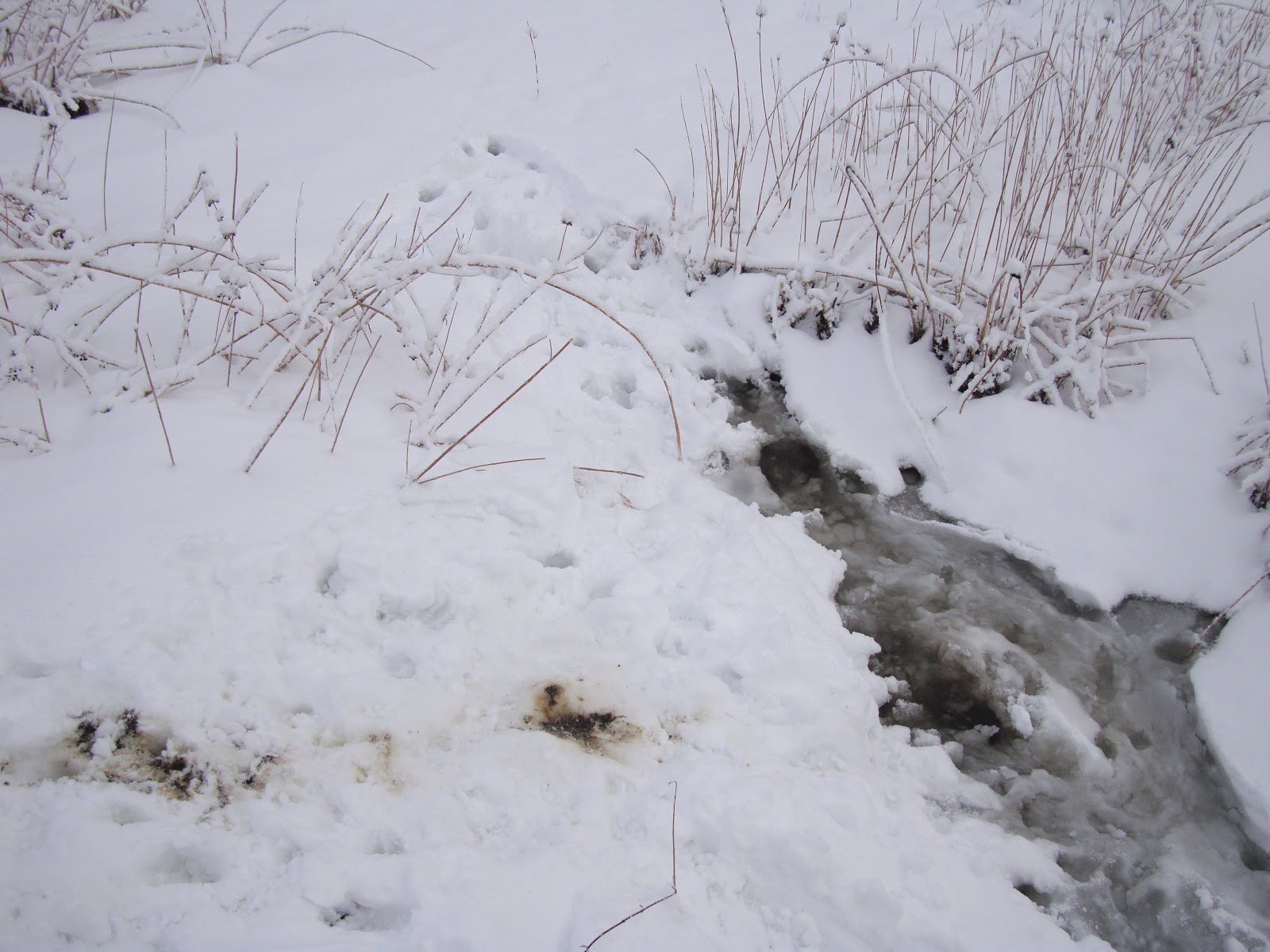 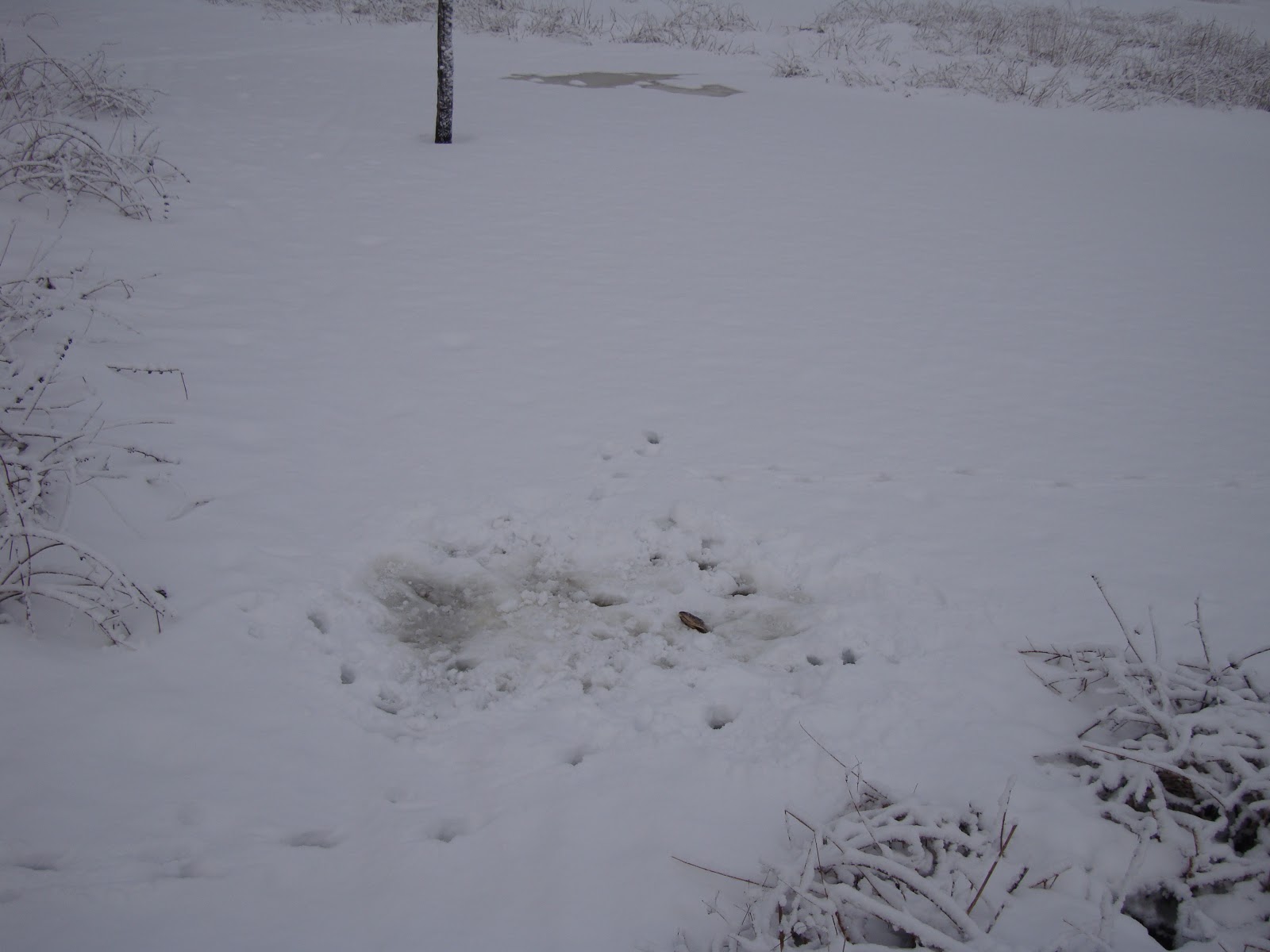 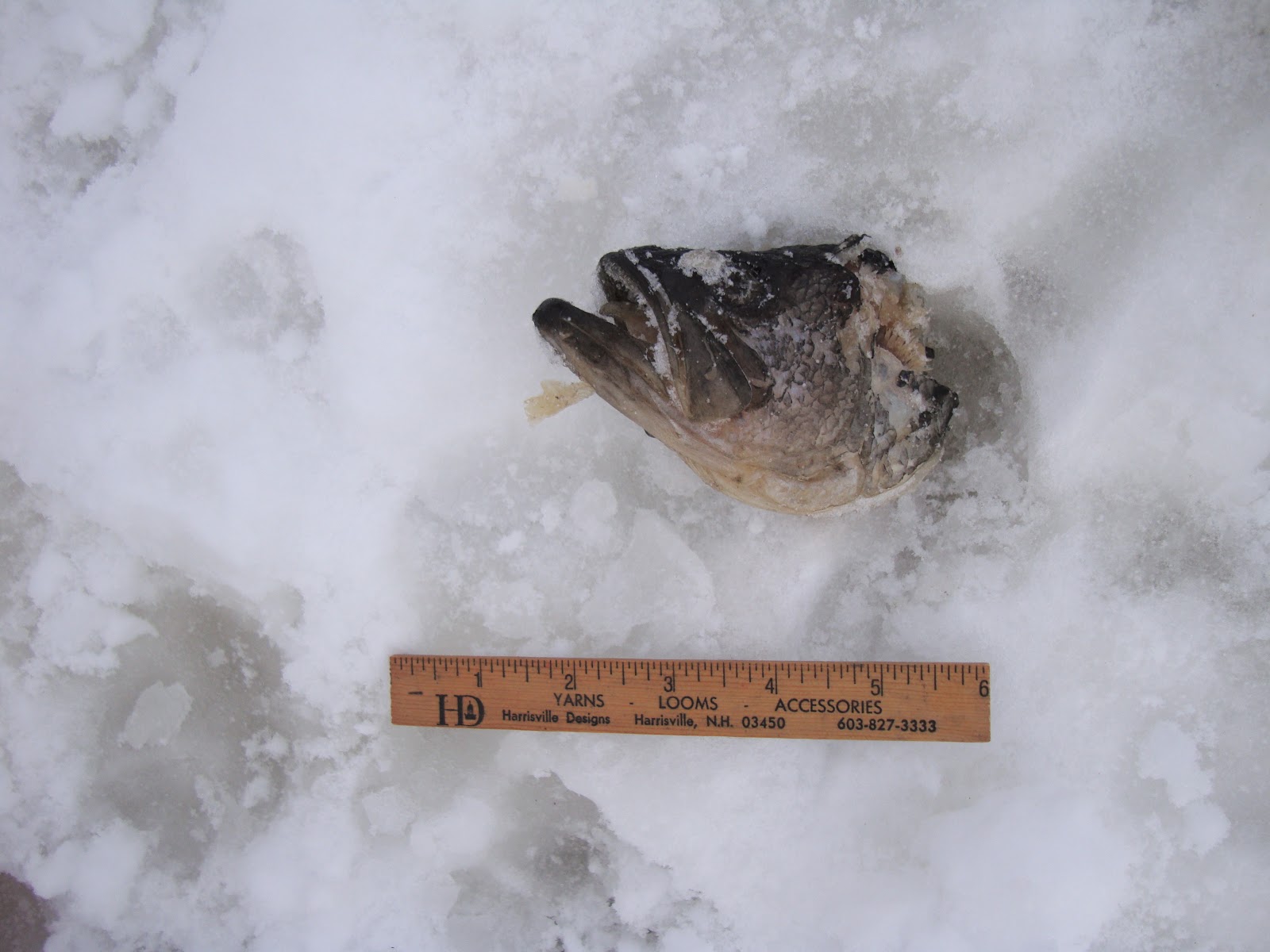 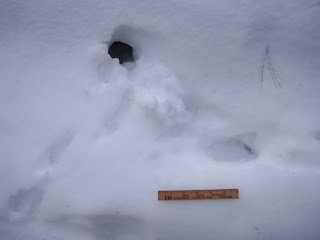 Which mustelid is this? Mink?  Taken on Flagg Hill Pond in Heath Hen Meadow 3 days ago. 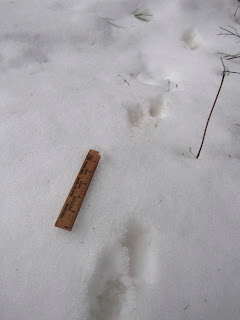 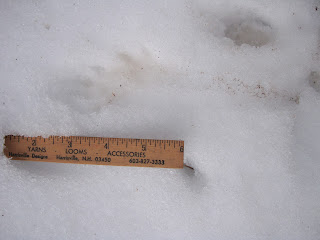 Lars followed a meandering fisher track in Heath Hen Meadow, Stow, and found a tight spot where he had to squeeze under a fallen branch. 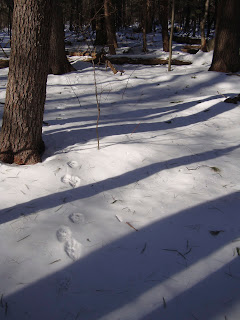 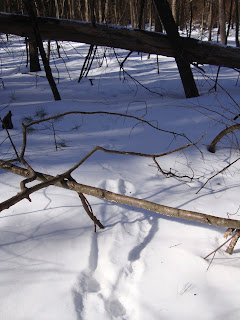 I was also out this morning in a Bolton orchard and indeed it was spectacular. I found the scene below along the edge of a trail that winds through the orchard. The first two pictures comprise the two halves of the area in question (right and left). There were no other tracks leading to or away from this area. The third picture includes my pole for scale. 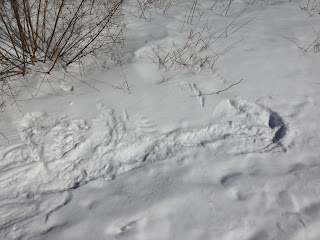 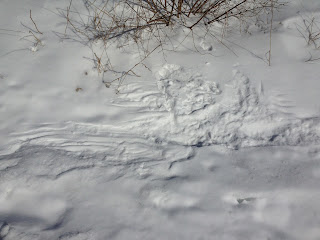 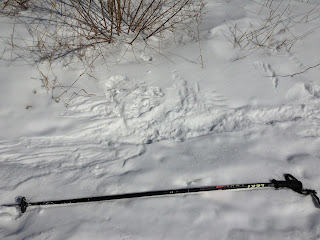 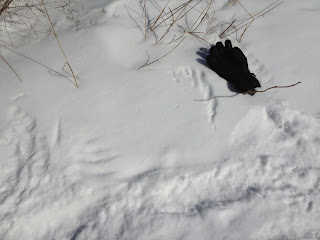 This is a close up of the middle of the area. If you look closely you can see several tracks that look more like hawk than owl. 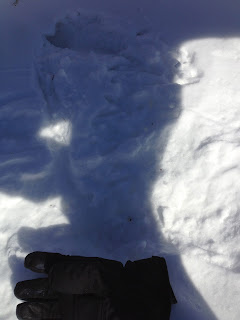 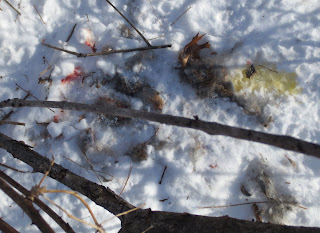 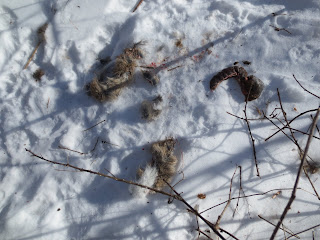 We followed the trail shown in my last post through a dense thicket, and  eventually arrived at the kill site shown here. The bobcat had traveled a long distance across the orchard to this very protected spot to enjoy the fine meal. The spot was a nice little opening next to a small log, totally surrounded by the brush that was very difficult for clumsy humans to penetrate. I fell only once, and ended up with some decent shots.

The first photo shows some cat pee and a lot of bunny fur. I believe one of the little clumps of fur was actually a foot.

The second photo was taken a few feet away from the first photo (still within same opening surrounded by brush), and shows cottontail intestinal tract (right), some hind end fur including the white tail (lower center), and I believe another bunny paw within the mess of fur at the upper left. And some cat trampling tracks, too, of course.

-Janet
Posted by The Nashaway Trackers at 11:57 AM No comments: 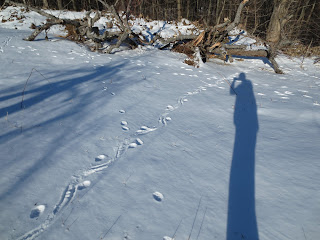 Really wonderful tracking in an apple orchard in Bolton this morning! Coyote trails criss-crossing everywhere. Abundant cottontail trails at the edges, and some venturing out into the orchard. The photo shows a trail of bobcat tracks with drag marks - probably the two hind feet of the rabbit. A google search of images of "bobcat carrying rabbit" does show that the cat often carries it such that the hind feet are hanging low. For example:
http://media.nj.com/warrenreporter_impact/photo/bobcat-4a10e5229741ae9b.jpg

It's interesting that the drag marks zig-zag. I think this is because the cat's head shifts to the side opposite that of the fore paw which is bearing the weight in each step, in order to maintain balance. I tried to verify this, and my head does that when I get on all 4's and walk like a cat.

These tracks were fairly fresh, because they hadn't been blown out yet (except at the top of the hill, where it was most exposed), despite this morning's fierce wind. In the top photo, the bobcat was moving away from the camera and into the brushy edge and woods beyond the orchard. We followed it out, and you will see what we found on my next post.

-Janet
Posted by The Nashaway Trackers at 11:52 AM 8 comments: 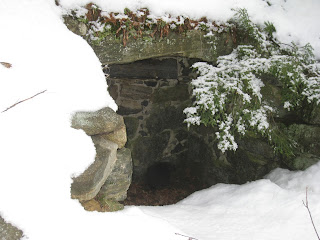 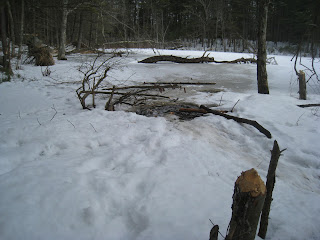 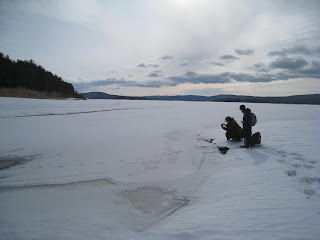 This is a short addendum to Janet's post of last evening.  The first photo features the porcupine in the old stone foundation.  You can see his entry/exit trail on the right.  The second shot is of the beaver pond we found behind the phragmites.  Fresh sign was everywhere.  Some long webby hind footprints are in evidence on the lower right of the photo, and that's the lodge in the background on the left.  The final picture shows Janet, Vivian and the mink tracks with the frozen reservoir in the background. 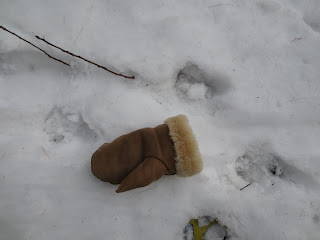 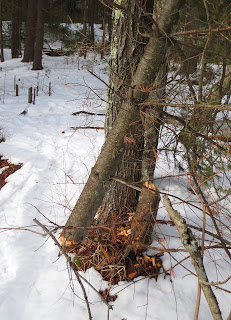 A beautiful day at Quabbin (gate 35) today, enjoyed by Vivian, Susan, and Janet. Despite the fact that an inch of new snow covered the ground, we found plenty of fresh (and old) tracks. In the upland area, we picked up several moose trails, a few moose beds, some piles of scat, and plenty of feeding and thrashing sign. Fresh weasel tracks, old otter slides, and an actual porcupine (in the old foundation off the dirt road) were among the highlights.

After skirting around a patch of phragmites, we found a beaver dam near the shore of the reservoir, southwest of the gate, which we never noticed before. There were a lot of fresh beaver tracks, beaver debris, and plenty of fresh cutting.

These desperate beavers have already cut most of the deciduous trees and are now working on the conifers. But even poor quality food is better than none at all, which is (almost) what they got after cutting the white pine in the photo, since it slid down but remains hung up in the vegetation. It would be interesting to return to this spot to see if they try to cut the tree again.

I saw evidence of such repeated attempts once before in a beaver wetland in Bolton: Beneath a tree hung up like the one in the photo, were two 1-2 foot sections of log lying on the ground, indicating that the beavers kept trying to cut the tree each time it slid down. But the upper portion of the tree remained stuck amongst the branches of adjacent trees, so the beavers never got the distal twigs that they're really after, and apparently they finally realized that the tree was not going to fall, and gave up.

Janet
Posted by The Nashaway Trackers at 8:04 PM No comments: 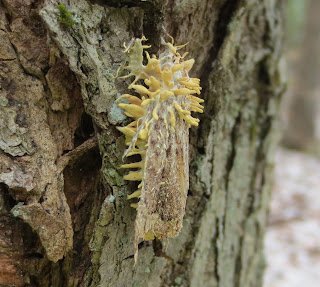 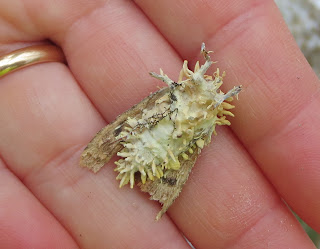 This yellowish fungal looking stuff caught my eye as I was wandering through the woods in Bolton, MA. At first I thought it was growing directly on the bark, but realized it was on a dead moth, after examiningmore closely. So I took a few photos, then picked the moth off the tree and snapped a few more.

At home I googled images of "fungus infected moth", and interspersed with all the ugly pictures of yeast infected human body parts (google evidently thought I was really looking for "fungus infected mouth"), were a few pics of moths and other insects with spikes growing out of them, similar to my moth.

Turns out that this moth was infected with one of hundreds of species of Cordyceps fungi, most of which parasitize insects or arthropods. Each species of Cordyceps fungi attacks only one host species. The fungus grows inside the host, eventually replacing the host tissue. The long things sticking out of the moth are the fruiting bodies of the fungus from which the spores disperse.

Here is a brief (3 minute) narrated video about Cordyceps fungi infecting insects. If for no other reason, watch it to hear David Attenborough's wonderful voice. The fungus is pretty interesting, too.
http://www.youtube.com/watch?v=XuKjBIBBAL8

-Janet
Posted by The Nashaway Trackers at 5:57 PM 1 comment: 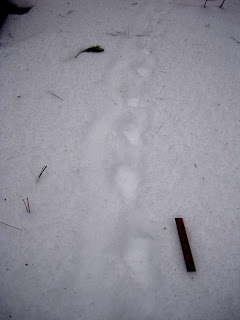 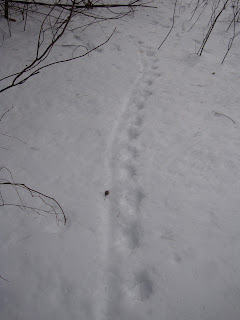 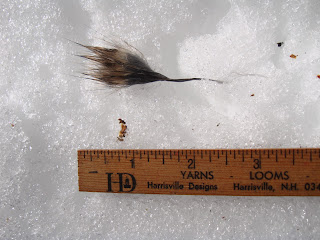 In Heath Hen Meadow in Stow, MA, Lars found a meandering drag track this morning.   One tuft of hair was on the trail.  There were lots of fisher tracks in the area.  This drag track was similar to what I posted in December 2010.  The ruler is six inches long.