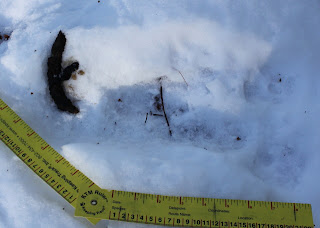 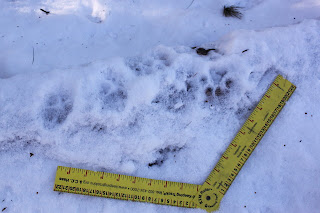 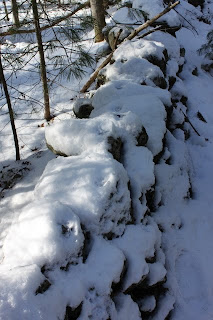 Janet and Bob Z. spent about 4 hrs at Quabbin today, where there were
many old, obscured tracks, but enough fresh, crisp ones to make for a
satisfying experience. Deer, moose, coyote, porcupine, etc., were all over.

As we were following moose tracks down a logging road, we noticed a scat
in the middle of the road. Bobcat tracks were leading to and from the
scat. In the photo, you can see the two front prints, with left clearer
than right, as well as the two hind lower legs, as the animal lowered
its butt to relieve itself. Positing a postprandial poop, we forgot
about the moose and backtracked the cat into the woods in pursuit of a
piece of pelage, or perhaps a portion of plumage, of the putative prey.

We ran out of time before finding any kill site, but the cat entertained
us with a lot of stone wall and log walking for the half mile we stayed
with it. One of the photos above shows its trail on a stone wall -- can
you find the cat tracks? I think the one at bottom center is pretty
easy to see.

You might have heard or read about the rule of thumb that says that a
felid will cross a log by stepping on it, but canids will step over it.
Poppycock. The coyote(s) that crossed paths with our bobcat stepped on
the log just like the cat did. The cat track is the roundish one on the
right.

We also stumbled upon (literally) 4 black powder hunters -- remarkably
pleasant, despite the fact that we had totally destroyed their chances
of a successful hunt. Though well armed, they confessed that it's more
about being out in the woods than getting a deer.

Posted by The Nashaway Trackers at 10:59 PM