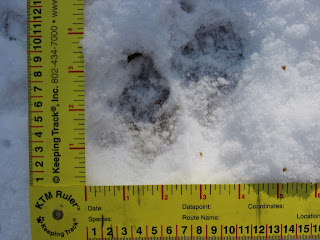 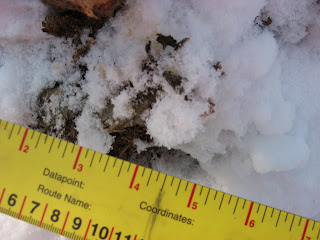 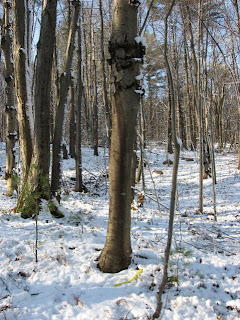 Susan and Janet saw their first fisher tracks of the season at Mt Pisgah
this morning. The tracks were small, most slightly less than 2 inches
in width, so we think it was a female. She used the 2-2 bounding
pattern to get from cavity tree to cavity tree, slowing down at the base
of each one, and probably climbing at least some of them. In the
immediate area, there were many black birches with some sort of disease,
creating the appearance of a blown up trunks (see photo), riddled with
cavities/crevices. Those were the trees that most interested her, not
surprisingly.

It was fascinating to see that she occupied a territory with so many
cavity trees in a small area. Roger Powell, who spent many years
studying fishers, reports that female fishers have much smaller, but
higher quality territories than the males. This makes sense. A
female's strategy for maximizing her chances of passing on her genes is
to maximize offspring survival rate, and having a lot of good hunting
options very close to home makes that easier for her to accomplish while
raising young.

On the other hand, the male's stratgey for maximizing the chances of
passing on his genes is to mate with as many females as possible. He's
not involved at all in raising the young. A larger territory means
access to more females.

Also note the scent post above. Overlapping with the urine stain is a
tiny twisted scat. A typical fisher find. The urine had a very faint
odor, that smelled, well, urinish. It was not particularly distinctive....

Posted by The Nashaway Trackers at 2:00 PM