We found this dropping while visiting Utah last week. Any idea who deposited it? (The foot in the photo belongs to my 15 year old daughter) 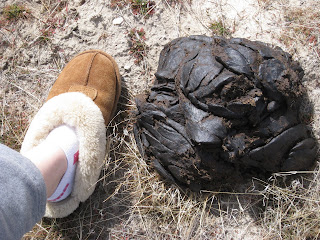 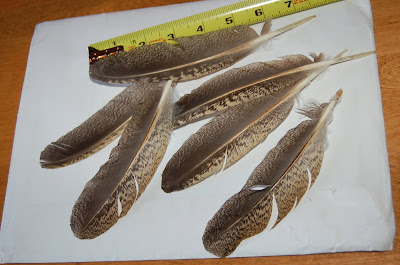 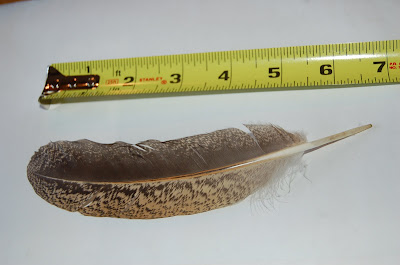 I came across these feathers in piney woods today and now wish I'd collected some of the smaller fluffy ones in the same vicinity. (It wasn't a kill site - more like a dining station.) I doubt that I can find the site again since I was really meandering. Anyway, I've looked in the reference books and checked online as well, and am stumped as to what bird they may have come from. Any guesses?
Posted by Susan at 2:23 PM 18 comments: 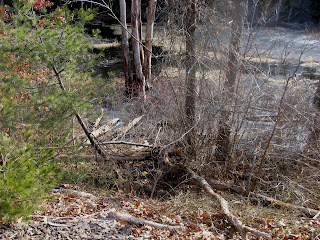 I was treated to a glimpse into the private life of a mink yesterday, a glorious morning, in Berlin, MA. While walking along a beaver pond, I saw it bound across the ice and dive into the water. I waited for it to surface, watched it shake itself dry, then bound, dive, emerge, and shake again, repeating the sequence several more times, always emerging with nothing. Finally, he (for I was pretty sure by the size that this was a male) came over to the edge of a pond and, a mere 20 feet from me, spent the next several minutes rolling, grooming, and luxuriating on a rotting log. The unobstructed view of this creature was breath taking -- I could see the white spot on the chin, the rich brown fur soaking in the sunlight, and the bits of wood splintering off the log as the animal wriggled contentedly, much like my cat rolls on the gravel driveway.

When sufficiently clean and dry, he walked straight to a large tree at the edge of the pond, and dug out a small dark, vole sized creature, as if he had known all along where to get an easy meal. A cache? Had he been hoping for something fresh and aquatic, before resorting to this? I watched as he enjoyed his meal. My view was partially obstructed, for he had settled among some thickets to feed in safety, but I was close enough to hear him chew.

Once satisfied, he hurried to and fro along the shore awhile, busily exploring, then paused in rapt attention over some woody debris, peering down between the fallen branches. He pursued for several minutes, and I could hear a sort of low, harsh hissing sound - the hapless victim, I think, in desperate effort to sound formidable. Finally, the mink captured the noble creature and carried it off triumphantly, out of sight, perhaps to cache it elsewhere.

The whole event lasted 20-30 minutes and most of it was only 20 feet
away from me. I had barely moved, and with the breeze rolling up the
bank into my face, I don't think the mink ever noticed me.

I thought about all those minky scats found on logs near water, and no longer wondered why it was that an animal would go out of its way to get up onto a log before relieving itself. (Do they REALLY "mark" prominent places with conscious intention?) Because I no longer think they do. It looks to me like if you're a mink, a high and dry log by the water is a fine place for sunning, grooming, and relaxing after a chilly dive, and you poop there because that's where you happen to be when it's time for number 2.

The photo shows the view from where I was standing. The rolling and
grooming took place on one of those logs. You'll have to imagine the
mink -- I did not want to scare him off by attempting to get a picture.

Janet
Posted by The Nashaway Trackers at 9:55 PM 3 comments: 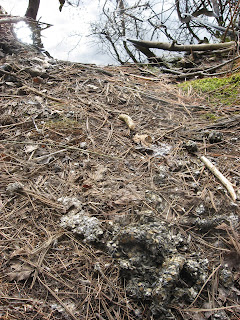 A well used otter latrine at Little Chauncy Pond in Westboro. There
were several such latrines, all located at the shore where understory
was open but overhead cover was good.

Posted by The Nashaway Trackers at 7:49 PM No comments:

A Blizzard of Os 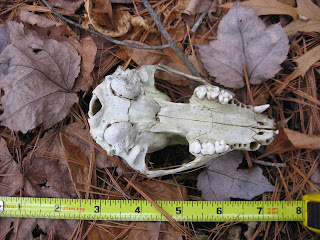 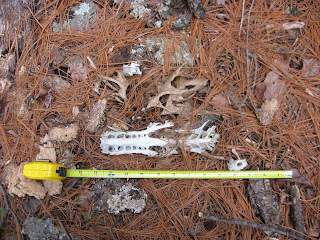 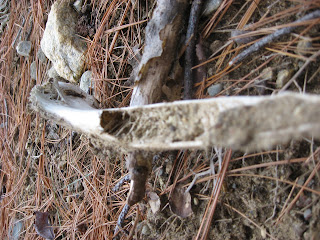 Well, really ossa (plural of os, Latin for bone). All of these and more were along the shore of Little Chauncy Pond in Westboro. Raccoon skull, swan neck vertebrae and back, and swan wing bone. Note that the wing bone is hollow, with struts (those strands of bone that you can see just left of the center of the photo) for strength. Hollow bones are an important adaptation for flight. Also at Chauncy pond was a piece of muskrat skull, but I don't have a good photo.

Posted by The Nashaway Trackers at 7:48 PM 6 comments: