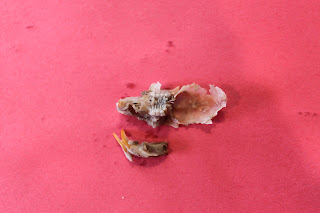 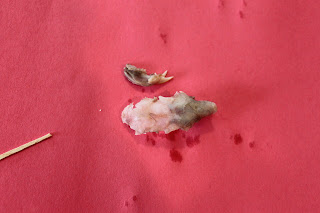 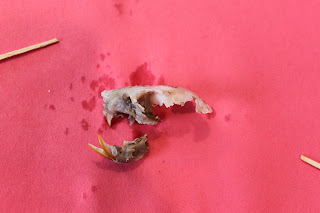 This is the skull from the presumed fisher kill site I posted about
earlier. I cooked it (simmered gently for about 15 minutes) to remove
the rest of the meat and get a better look at the bones. It smelled
something like lamb stew, in case anyone is wondering. Funny, I thought
it would smell more like chicken for some reason, but, no, closer to lamb.

I used Mark Elbroch's book on animal skulls to ID it as red squirrel, as
suspected. But what is more interesting is the jagged edge around the
brain case. I don't think a fisher's huge canines would leave such a
delicate edging on a little squirrel skull. Perhaps that's more likely
the work of scavenging rodents, aging the kill at something more like
hours, rather than minutes, I would guess. So my fear that I was the
one who scared off the fisher was nothing more than self referential
ideation. A common trap.

How long does it take for rodents to enter the site and do this? Maybe
Dan's cameras will answer that question one day.

Incidentally, Elbroch's book on skulls is tremendous, especially the
initial section on comparative anatomy. I seem to recall learning about
skulls in the distant past, with a totally different
mission.........something to do with relief of human suffering and
reducing human mortality....Far less interesting than peering into the
private lives of other species.

Posted by The Nashaway Trackers at 10:28 AM