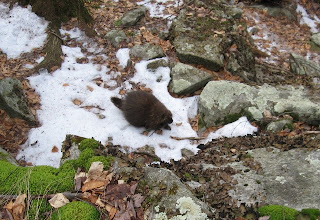 Janet writes: Amazingly, Dan and I saw 4 porcupines at Quabbin
yesterday. One was in a den, and the other three were srabbling up a
slope of boulders, one of which is pictured above. There were a lot of
porcupine dens in the crevices of this slope, many of which had piles of
scat spilling out of them, indicating heavy usage.

Perhaps the most unusual experience of the day was the sound emitting
from one of the rock crevice dens. I've been close to porcupines
before, and none of these well defended animals has ever seemed
particularly concerned, especially those which are safely concealed in
dens. But we could hear a sort of hum coming from one of the dens. We
could not see the animal, until it scurried out and slipped through
another crevice into a deeper cave.

If you google porcupine sounds, you will find some recordings of what
this sounds like. Dan says it reminded him of guinea pig vocalizations.
It reminded me of our rabbits' sounds of annoyance when we pick them
up. I am not sure why this particular animal felt threatened, but in
his book "The North American Porcupine", Uldis Roze writes that it is in
fact a warning sound. He calls it a "tooth clack" and says the animal
produces it by chattering its teeth.

By the way, I highly recommend Roze's book. It is beautifully written,
scientific, and hilarious at times, if you read carefully enough to
appreciate his subtle humor. An unusual mix. I laughed my way through it.

Posted by The Nashaway Trackers at 5:29 PM