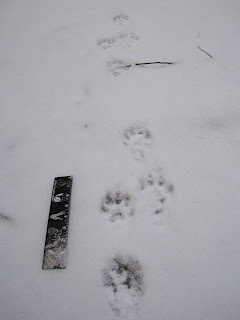 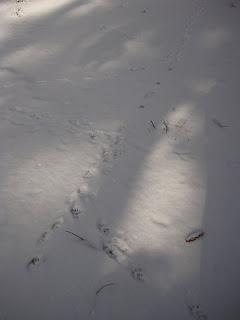 Lars was out on this beautiful day, at the northern end of Delaney Complex in Stow. The first set of tracks led me straight to the marshy kettle holes between the drumlins. Then one track led to another.

I followed this fisher down to the ice, where he was distracted by a second track. He comes in at the bottom right, picks up the scent, cuts off to the left, and immediately turns back to the track and follows it a second time. There were two sets of fisher tracks, one smaller than the other. According to Mass Audubon, mating season is in March/April.


Then farther down the kettle hole, a weasel (or mink?) crossed the fisher path (see blue box photo). I could see a nice bounding pattern, and a tail drag. The tail drag curls with a change in direction. I found tunnels and scat.

The last photo is at the edge of open water/open marsh. There were spots where the mink ducked in the water and out, with some short slides. Here the animal does a "to and fro". As he returns along the same path, you can see the tail drag curl in opposite directions.

The black ruler is 8 inches. 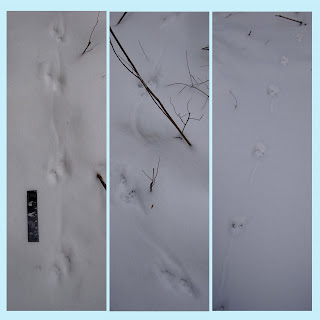 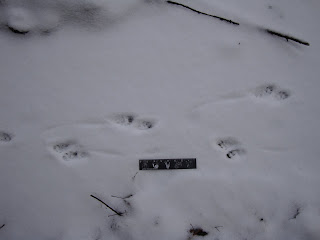