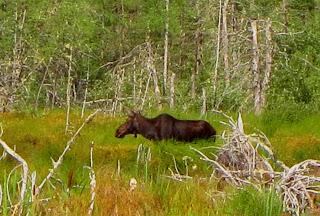 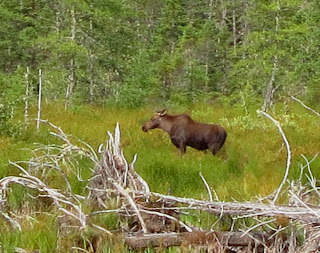 So many people say they've seen "hundreds" of moose in Maine, yet the
experience was still on my bucket list until this past August. Even the
expensive moose safari to a remote pond in the summer of 2011
disappointed us. It was only the 2nd time in the career of our seasoned
guide, we were told, that the no moose were seen on one of these
typically magical adventures. So, this year, we didn't bother with the
guided expedition. But one morning, while in the car en route to a
trail head, I caught sight of a moose in a beaver wetland as we whizzed
by. "Moose!!!", I screamed. "Go back!"

So we spent the next 15 minutes watching mother and calf through
binoculars. The "calf", by then almost as large as mom, is noticeably
lighter in color.

Janet
Posted by The Nashaway Trackers at 12:00 PM