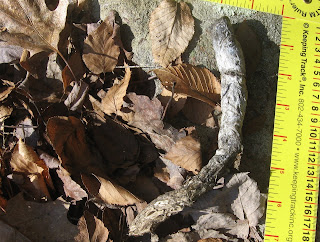 Dan and I (Janet) spent the morning at Quabbin on this beautiful early
spring, nearly snowless day. Very few tracks, but lots of interesting
things to ponder, regarding such items as plants and scats, not to
mention other random topics of conversation, ranging from climate change
to propaganda and social change.

We picked up the group camera, which, disappointingly, had nothing much
more than a few rear views of a raccoon. I think Dan's camera caught a
few more interesting shots.

Without the snow and ice up on the hill, it is possible to safely
descend the east face of the cliff. On that east face, in the nooks and
crannies between the rocks, are many porcupine dens with their tell tale
piles of fresh-looking scat (fresh as in this winter). I wonder how
many different porcupines spend a given winter there. Are there really
lots of them (I would say we found around 10 dens, and I doubt we found
them all), or do only a few individuals occupy the face in a given
winter, moving from one den to another?

Perhaps the most interesting finding was a scat in the shelter of a rock
overhang on that east face. See photo. Note that the scat is full of
grass at the bottom end. I thought the top end contained some deer
fur. Well, all that grass is certainly more consistent with canid than
felid, but I wouldn't rule out bobcat, here. It is not twisted the way
canid scats often are, the cliffy face is more consistent with bobcat
than coyote, and we know from our snow tracking that a bobcat lives in
the immediate area. I'm not sure why it would eat so much grass. Maybe
it was starving and just wanted to fill its stomach with anything.
Starving people sometimes eat dirt, not a typical menu item for most of
us. Desperate times call for desperate measures.

Following the power lines back to the car, we noticed the ground was
covered with what we thought was wintergreen. I will not forget the
look of horror on Dan's face as I popped one of those bright red berries
into my mouth. Definitely wintergreen. Edible and delicious.

Posted by The Nashaway Trackers at 9:31 AM