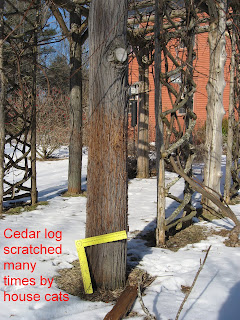 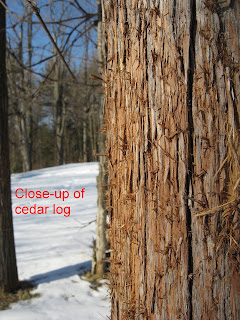 This is in reference to another topic, "Bolton Bobcat - 2/27/09". There
are two more photos that go with this post, but they wouldn't fit all in
one email, so I'm sending them under "Cat scratch posts #2".

House cat scratch posts - see photos of the cedar logs that my 4 cats
have scratched many, many times, and note all that splintering/fraying.
Note that the damage starts about a foot off the ground and goes to
about 3 ft off the ground. Note that you cannot see actual claw
gouges. These logs are their favorite scratch posts, but I have seen
them occasionally scratch other trees and logs around the yard. When
it's a tree that they do not scratch repetitively, you can barely tell
that the tree had been scratched at all.

Basswood tree: (for photos, see subject "Cat scratch posts #2"): Was
the fraying caused by antler rubbing, cat scratching, or both? Well,
those gouges (upper part of the close-up photo) look like antler tine
marks to me. They are going in different directions, not parallel like
claw gouges are. I think antler rubbing could account for everything
you see there, but that doesn't rule out the possibility that a cat then
scratched the rubbed portion of the tree.

What do bobcat scratch posts look like? For one, I'd expect the marks
to be higher than those of house cats, since the bobcat is twice as
large. The ones I've seen photos of have actual claw gouges, like those
shown here:
http://www.mccullyheritage.org/bobcat%20scratch1.jpg

....But that doesn't mean that bobcats don't also do something similar
to what domestic cats do. And, if the bobcat doesn't scratch on the
same tree repetitively, the marks it leaves might be quite subtle. Or,
if bobcats like to scratch on already damaged wood of buck rubs, we
might miss them because we attribute all of the damage to antler rubbing.

So, I am glad you brought this up, Susan. You have reminded me to look
more carefully for scratch posts.

Obviously, another thing to do when examining the damage done by rubbing
or scratching, is to take the substrate into consideration. The marks
are going to look different on different tree species, and on logs at
different degrees of decay. The basswood above, for example, has a lot
of stringy fraying, but that is characteristic of the tree. (Native
Americans used to make rope out of the stringy inner bark of basswood.)
Other trees will look different when rubbed or scratched.

Posted by The Nashaway Trackers at 8:42 PM