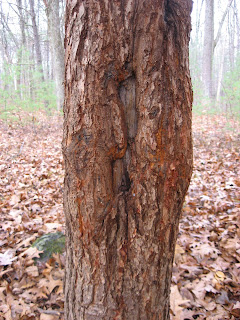 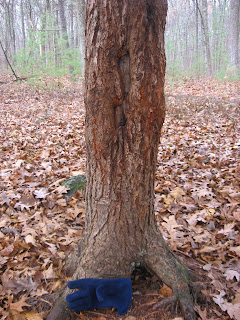 Janet took these photos about 2 months ago while doing a tree inventory on a 15 acre plot within the lime kiln / rattlesnake hill area in Bolton.

This 8-10 inch diameter hemlock, one of only 3 hemlocks within the 15 acres of oak/pignut/pine forest, is evidently used for antler rubbing year after year. As you can see, there is evidence of both fresh rubbing and old scarring, and it went 360 degrees around the trunk.

Bucks usually choose small trees of 1-4 inches in diameter (this is the 2nd largest tree used for antler rubbing that I've ever come across), so why is this tree so well used, and is it the same buck year after year, or a number of different bucks?

No clue about the latter question, but as for the former, I wondered if bucks have a preference for whatever tree species are less common in the area.  Choosing such a tree would have greater visual and olfactory impact.  This hemlock certainly stood out visually within the predominately deciduous forest, and the rub was noticeable from far away.  To deer, the scent probably stands out, too.  I did a quick lit search and found a 1988 study which showed that bucks actually do prefer the less common trees for rubbing!  Never read this in a tracking book, but it's there in the scientific literature.

Hunter's lore has it that bucks with bigger antlers choose larger trees for rubbing...But I haven't been able to find any studies supporting that.


Posted by The Nashaway Trackers at 9:44 PM