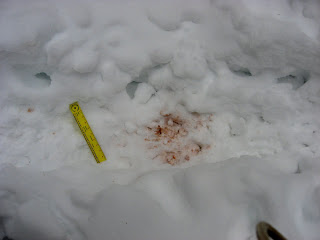 Lots of "precious bodily fluids" out on the snow yesterday. I could see
the coyote highway from quite a distance, so knew there was something
good to see up yonder. As I approached, I noticed fisher tracks
entering from another direction. The photo was taken prior to my
tampering with the evidence.

I tried unsuccessfully to excavate -- it was too frozen. However, I do
believe this is something buried under the snow, rather than just the
remaining blood stain, because for the few inches I was able to dig, the
stain became denser and denser. Look like the animals keep returning to
see what they can dig up. No other feeding sign on the snow surface.

You, see, I really can find the occasional kill site even without the
dogs, although I must admit that while struggling to excavate, a certain
Jack Russel terrier came to mind...

Could be a good place for a camera.

Posted by The Nashaway Trackers at 12:16 PM