Two Owls, a Cross Fisher, and a Lazy Fox 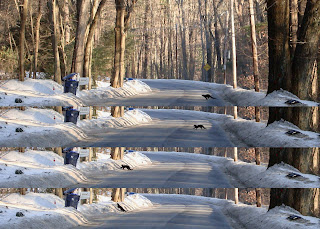 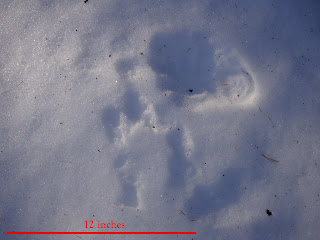 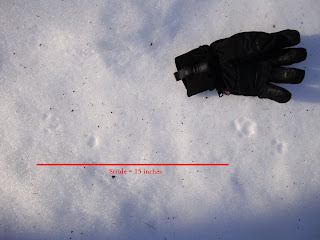 Lars reports a few sightings.  Yesterday, I was crossing the ice of the swamp of the northern section of Delaney Complex between Finn Rd and Taylor Rd in Stow/Bolton.  I roused a pair of great horned owls on the southern edge of a pine stand jutting into the pond.  I followed as they took flight and saw them three times. Then they doubled back to the original location.  Nesting pair?  Online owl reports are possible at www.massaudubon.org/owls

On Feb 17, I was lucky to see and photograph a running fisher.  I saw him running (loping) across the woods as I parked to go into Heath Hen Meadow conservation land on Boxboro Rd in Stow before 8 AM.  As the fisher came up to the snow bank, he looked both ways before crossing!  I got four frames and photoshopped them together.  The BFI dumpster has been included for scale.  Male, female?

Finally, I found a body print of what I presume to be a sitting fox. This was near the eastern edge of Marble Hill/Stow off Taylor Rd. His trail had a narrow, direct-register line, then broke to a 2-2 rear foot-leading pattern. Body print and gait included.
Posted by The Nashaway Trackers at 10:25 AM