River Otter in Dan's back yard 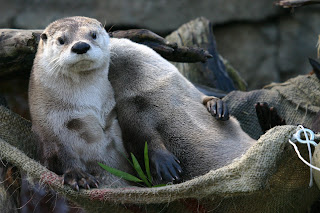 Earlier this week I noticed a river otter on the far shore of our back
yard pond. He (or she) had hauled out through a break in the ice and was
sunning himself on the shore. He spent about 10 minutes rolling and
grooming, and then proceeded to build a sort of "nest" by piling up
branches and leaves against a small stump. Perhaps he did this so
that he'd have a level spot to sleep on the sloping shore. I was
surprised that he used his mouth for this task. I figured the front
paws would be used to put stuff into place, but he relied solely on
his mouth - quickly scampering up to 10 feet away, grabbing a mouthful
of sticks or oak leaves, and then bringing them back to the pile.

He left after creating the pile, and while it looked "nest-like" to
me, I didn't see it in use for another two days, when he returned.
After grooming and rolling around in pine needles (which sort of
negates the benefit of grooming, doesn't it?), he curled up in the
constructed pile and went to sleep, nose resting comfortably on tail.
He slept for at least 20 minutes, but when I checked back an hour
later, he had gone.

After the first visit, I placed a remote camera on a nearby tree,
hoping to get some photos of his return. He didn't seem to mind it on
his second visit, and if it's actually working this time (it's been
acting up lately) I should have some excellent photos. I'll retrieve
it next week and post a follow-up. In the meantime, enjoy my photo
of two river otters at the San Francisco Zoo.

Posted by The Nashaway Trackers at 11:32 AM