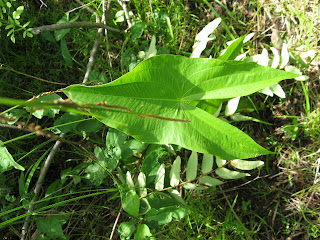 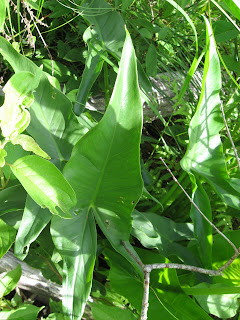 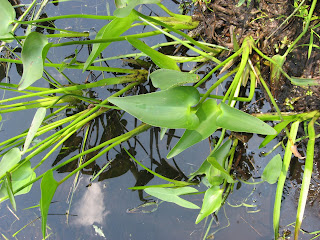 Janet writes: I have been spending much time learning about the flora of New England, these days.  Yesterday I identified 3 plants, all with leaves shaped like arrow heads, and all growing in a beaver pond and along its margin.

I hope the photos appear in the order I intended.  If so, the first is arrowhead, the one with the edible tuber, sometimes called duck potato.  The genus is Sagittaria, named for the arrowhead leaf shape which is known to botanists as sagittate.  The species shown here is, I think, latifolia, the larger leafed of two closely related ones.  The smaller species is Sagittaria cuneata, listed as threatened in Massachusetts.

The second photo is arrow arum, Peltandra virginica, but its plump tubers are said to be toxic, if eaten raw.  The experience of eating them has been likened to swallowing a mouthful of needles.  Kind of makes me wonder how anyone could eat enough of it to get sick.  Some folks claim that cooking it makes it edible, but others say it made them sick even after it was boiled for 20 minutes.  I won't be trying this one any time soon.

Finally, the leaves of pickerelweed, Pontederia cordata, are said to be edible if picked in early summer before they have unfurled, and the nut-like fruit gathered and eaten in late summer.

I found it curious that 3 distinct pond plants all evolved with "sagittate" leaves, a shape rarely seen in uplant plants, so I asked a botanist friend if he had an explanation.  He suggested that the shape allows water to drain off quickly, an advantage if leaves get submerged from time to time, since otherwise sediments could collect on the surface.

Posted by The Nashaway Trackers at 10:13 PM