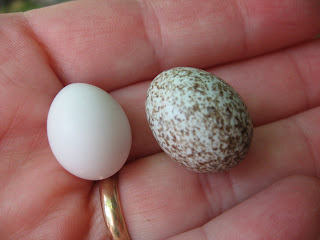 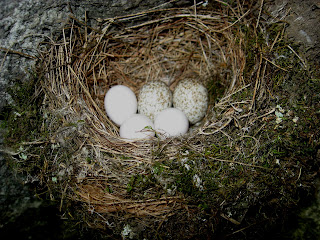 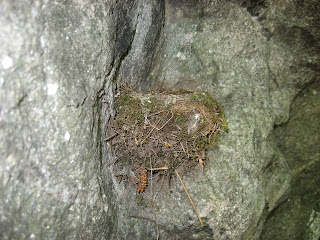 Janet was snooping around in central MA this morning, and discovered
this nest plastered to the wall of a cliff. This was well of the beaten
path, and the cliff wall faced a large wetland. As you can see, the
outer part of the nest is made of moss and other fibers, and lined with
fine grasses. I believe the nest and white eggs belong to an eastern
phoebe, and the speckled ones were left by a brown-headed cowbird.

Phoebes often build their nests on human made structures: under bridges,
on rafters, trestles, etc. Natural sites like you see here have become
fairly uncommon, according to what I read, so I was excited to find it.

I've also learned that, like this one has been, phoebe nests are heavily
parasitized by brown-headed cowbirds, and the phoebes often dessert the
nest and begin anew, when they discover those big speckled eggs.
However, these eggs were quite warm, so I think someone has been setting
on them. I must have frightened her away without realizing it.

Posted by The Nashaway Trackers at 5:25 PM