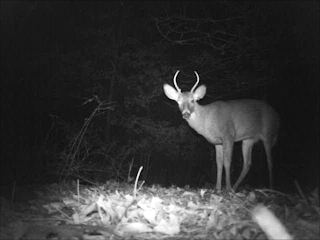 Dan set out the group's camera to take night video at a deer scrape at
the Delaney Wildlife Management Area in Stow. A young buck visited the
scrape each night, freshening and sniffing the scraped earth, checking
for does, and leaving his scent on the overhanging branch above the
scrape. At one point he notices the red glow from the IR LEDs on the
camera, and stamps the ground, frightening himself in the process.

A few hours later he returns, and while he's at the scrape a second set
of eyes appear in the woods. A doe? He rushes off to investigate!

Here's a direct link to the video on YouTube, if the embedded video
below doesn't work:
http://www.youtube.com/watch?v=huJcbGDIpkg

Posted by The Nashaway Trackers at 12:21 PM