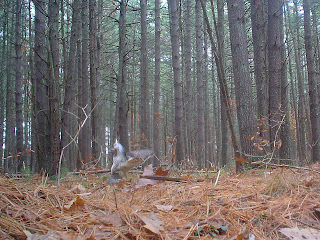 Dan writes:
A week ago I was walking through the pine forest in the north part of
the Delaney Project when I saw a red-tailed hawk being chased by a crow.
The hawk wasn't too happy to be chased, but he wasn't too eager to
leave the area, either. He'd fly to the next tall pine and perch
momentarily, before being driven off again.

A few hundred feet further down my path, I found a freshly-killed gray
squirrel. The squirrel was still warm to the touch, with fresh blood
around a fatal neck wound.

I moved off a ways and waited to see if the hawk would return to claim
his abandoned meal. But the forest was quiet, and the hawk and crow had
moved on. I hiked back to the other side of Delaney, picked up a remote
camera trap, and returned to the squirrel kill an hour later,
half-expecting it to be gone. But the squirrel lay exactly where I'd
left it, and so I quickly set up the camera and left the area.

When I returned a week later, the squirrel was gone, and not a trace of
the incident remained. A single image on the camera showed the
red-tailed hawk swooping down to fly off with the squirrel. The hawk
got his meal that same afternoon, about five hours after his initial
attempt was thwarted by the crow and the hiker.

Posted by The Nashaway Trackers at 10:01 AM