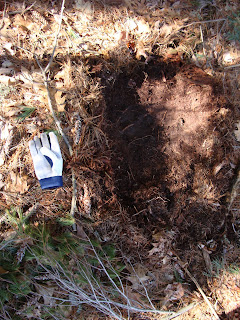 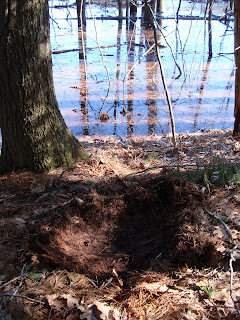 Lars was out in the northern end of Delaney Complex/Stow on March 17th. Because the trail was under water due to recent flooding, I was cutting across the slope at water's edge. I surprised a beaver about 10 feet up on land. He jumped back in, then circled around several times to check me out. He gave me a loud tail slap three times, trying to chase me off. See the last few seconds of the 30 second video.

After he jumped in, I found (curiously) that he had been clearing a small area of forest duff. See the two photos. My glove is 9.5 inches in length. He scraped it down to dirt. I wondered if he was preparing the spot to build a scent pile, but three visits back to the site during this past week reveal no further disturbances. And why would he scrape it down to then build it up?

What was he up to? Lars