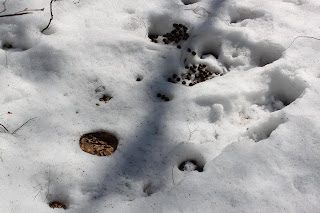 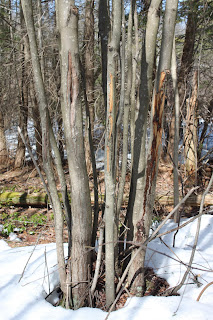 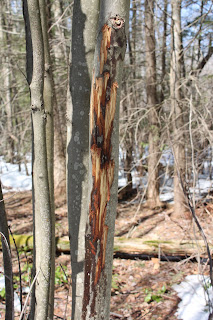 I spent the better part of the day at Quabbin last Monday,
wandering about. There were some patches of snow in cool, sheltered
areas, but mostly bare ground. I was a little surprised to find what I
think is a moose bed (first photo) in one of those patches. Did the
moose bed down in snow even after bare ground was available?

If no one else, Lars might be interested to learn that the word moose is
thought to come from the Eastern Abenaki Indian word meaning "he trims
or cuts off". Indeed, there was an abundance of sign of moose trimming
and cutting in and around a red maple swamp. The second photos shows
the mother clump red maple, with both fresh and old incisor scraping.
The third photo shows a close-up of fresh scraping. You can see the sap
flowing out, as well as the characteristic fraying at the upper end of
each scraping (and lack of fraying at the lower ends).

Posted by The Nashaway Trackers at 5:36 PM