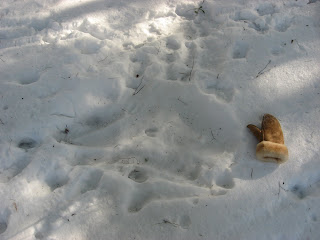 Susan and Janet tracked in the woods off Monson Turnpike in Petersham
today, in search of bobcat sign as described by Bob. We picked up the
trail of bobcat tracks where he had, at the top of the hill near the
cliffs. We chose backtrack the cat prints down the hill, as Bob had.
We reached the logs he had mentioned. The logs had the sent of bobcat
urine spray, but we did not find evidence that the cat had been using
the logs as shelter or napping sites. It appeared to us that the cat
merely investigated the logs. So, rather than place the camera there,
we continued on, following the cat tracks, and came to a small scat
where a bit of blood stained the snow. There only tracks in the
immediate vicinity were those of the bobcat. We dug up the remains of a
gray squirrel - just the tail, some additional fur, and a large
cat-looking scat.

We decided to mount the camera at the cache site. However, we noted
that the freshest bobcat tracks in the area were those that Bob had
followed 3 days ago. Thus, it does not appear that the cat frequents
this area on a daily basis, but we suspect (hope) there is a decent
chance that it will return to the place where it found either a meal or
another animal's cache. Maybe other predators will be attracted to the
squirrel cache, too.

I found it interesting that a (presumed) cat scat was buried with the
squirrel remains. I have read in several books that bobcats typically
do NOT bury their scats. But perhaps this indicates only that unburied
bobcat scats have been found by people. Perhaps bobcats sometimes (or
often) bury scats that no one ever discovers. The scat buried with the
squirrel tail remined me of J. David Henry's findings that red foxes
seem to have a sort of labeling system, urinating their on caches only
after retrieving them. For the fox, this appears to be a way of keeping
track of which caches it has consumed and which are still available for
a future meal. Do bobcats have a similar labeling system using their scat?

Other noteworthy findings on this hike: Deer beds (see photo), moose
tracks, moose beds, moose scat, porcupine trails and feeding sign. Most
of this was amongst the hemlocks at the higher elevations approaching
the cliffs.

Posted by The Nashaway Trackers at 8:05 PM