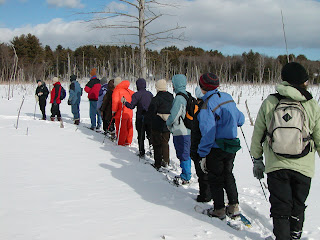 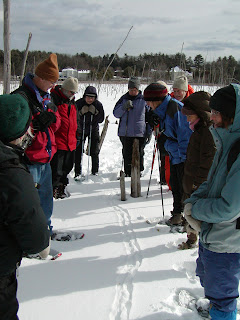 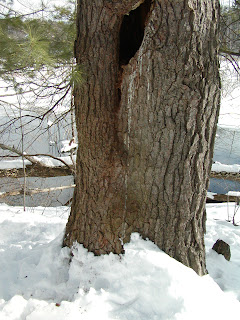 Dan helped Lydia R. lead a winter tracking hike for Sudbury Valley
Trustees at Nut Meadow, Concord. There were 16 attendees, including
Karen and her husband from Assabet Keeping Track, and Don from
Littleton, who joined us for our Keeping Track training in Vermont.

We found red fox, fisher, raccoon, mouse, crow, and heron, and found
the remains of a bluebird that was probably taken by a hawk or owl.
The red fox took advantage of a cross-country ski track, never once
stepping off of the packed snow left by the skier's left ski.

Other highlights included a temporary fisher den in the upturned root
ball of a fallen red oak, with muddy footprints coming and going along
a well-packed run. Further out on a peninsula we found a giant white
pine with a cavity at chest height, with raccoon tracks leading away.
The tracks were discolored from the rotting pine wood inside the
hollow portion of the tree. The lower bark showed numerous climb
scratches and held a hair or two. Fisher tracks also led up to the
tree.

That same fisher left a full body print, including tail, after jumping
out of another big red oak.

Out on the frozen beaver pond, we followed the raccoon and found some
wing impressions left by crows as they landed, explored a bit, and
then took off again. We found the feathers of a small, junco-sized
bird, and turned up several deep blue feathers, leading us to believe
it was a bluebird.

Despite some cold toes and fingers, everyone seemed to have a good
time, and several people remarked that there ought to be a central
Web site or mailing list for finding out about tracking walks in the
area.

Posted by The Nashaway Trackers at 6:59 PM