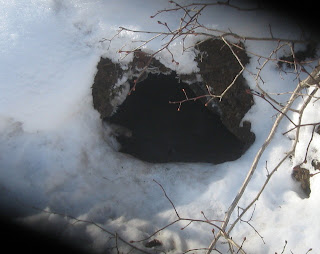 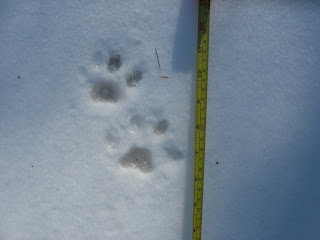 Several people from our group, along with about 10 other people, walked
the loop trail at the Oxbow. We saw plenty of coyote tracks and scat, a
dead Canada goose frozen in the river near the shore, the remains of
blue jay (just feathers), raccoon tracks, a few otter scats near a
well-used hole in the ground that led to water, possible fisher tracks
(old and melted out), a lot of red squirrel digs, deer tracks, and the
ubiquitous beaver sign.

But the highlight was the trail of bobcat tracks coursing throughout the
area We followed them out onto the ice and reached a lair (see photo).
A largish (maybe 10 inch diameter) hole entered a snow-covered knoll,
with bobcat tracks going right towards it. The photo isn't very good,
because the lens cap was partly frozen shut, but if you look carefully,
you can see a cat track at the bottom left. There is also a very small
scat at the bottom center, but this appeared to be full of seeds, and
looked much more like fox scat (or even fisher scat) than bobcat scat.
There were a few more of these small, seed-laden scats on top of the
knoll. Perhaps this hole has been used by multiple animals in sequence.

Posted by The Nashaway Trackers at 5:37 PM