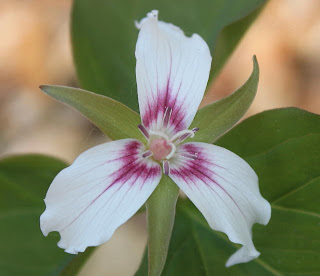 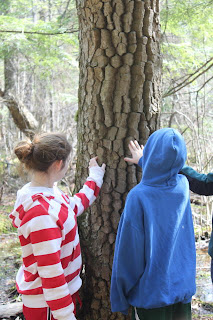 Janet writes: These photos are from a recent family hike up to a
ridgetop black gum swamp in southern Vermont. In the top photo you are
looking at the thick, furrowed bark of a mature black gum (tupelo)
tree. I'm guessing maybe 200 yrs old (?). A younger specimen would not
have such deep furrows. An older specimen (around 400 yrs) might have
smoother bark in this climate, because exposure to snow and freezing and
thawing over the years causes the blocks of bark to fall off. This
tree's diameter is not that large, probably because the conditions on a
New England ridgetop are rather harsh for a black gum, which prefers the
warm swamps of the southeastern US. Yet, it is the dominant tree
species in this high elevation VT swamp. How to explain that?

The wood of black gums is so light weight (partly because they hollow
with age), and brittle, that trees usually loose just their tops when
subject to severe winds, as ridge top trees often are. The tree remains
alive and can sprout, and vigorously sprout they do. Most other trees
have heavier wood, and in an exposed setting like this, will topple and
die when hit by severe wind, because the roots come up out of the ground
as the tree falls. So, in this environment, a black gum has a
competitive advantage over other species.

So how did this southeastern species get to Vermont? It was common in
the northeast during the "Holocene Thermal Maximum" of 5,000-9,000 year
ago, but its range receded southward as the climate cooled, leaving, in
Vermont, only remnant populations on ridgetop swamps where they could
out-compete other species.

Painted trillium graced the humusy, acidic floor of the swamp when we
visited several weeks ago.

Posted by The Nashaway Trackers at 7:12 AM