A Threever of Beaver or a Romp of Otter? 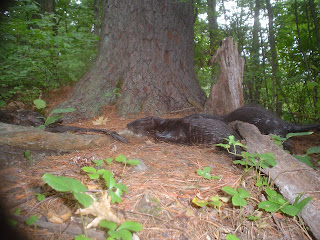 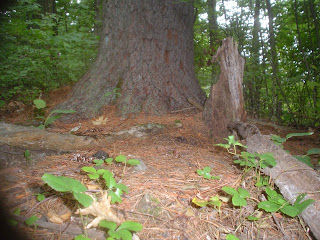 Dan writes:
We recently learned that three raccoons is called a gaze or nursery. So
what do you call three beaver? I propose that this be called a threever
of beaver.

My initial reaction when I saw this photo on my camera's screen was that
I was seeing otter. The animal in the rear has that sleek otter form.
But the heads look more like beaver, and the lead tail looks flat and
hairless.

I've never seen beaver slinking along all flattened down like this. It
looks like #2 went under the log, while his friend decided to go over
the top. In the second photo, you can see a new wet spot on the log -
was there a fourth member of the party?

I didn't notice it until now, but the second photo (taken 50 seconds
later) also shows two glistening piles (one in dead center, the other by
the pinecone in lower left). What's up with that?

Sadly, I had another camera aimed at this spot, but it triggered off the
water (to the right of these photos) and filled its card by the second day.

Let's hear some opinions. What's going on in these photos?

Posted by The Nashaway Trackers at 10:40 AM