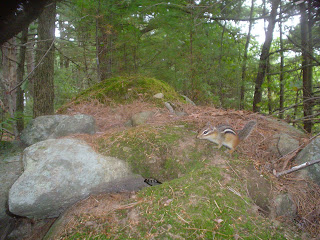 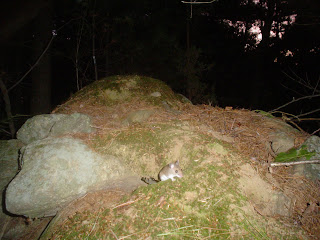 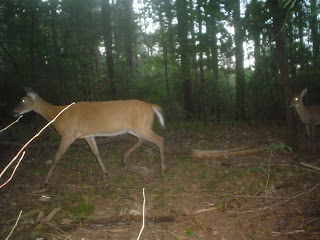 Here are some recent motion-activated photos of animals around a hole in
a stone wall back in the woods. Over the course of six days, the camera
captured several dozen photos of the chipmunk going in and out of the
hole (lower center) as well as visits by a mouse, grey and red squirrel,
and a very blurry red fox. The deer photo was taken on a nearby game
trail. That camera also picked up some squirrel activity (across the
log) as well as a blurry photo of a raccoon.

Getting a photo of a fox at the chipmunk hole was a surprise to me - I'm
always surprised at how many different animals show up at sites that are
clearly "owned" by one species (in this case, the chipmunk). The mouse
appeared to be using the same hole as the chipmunk (and also exited
under the rock in the far lower left).

Finding an active "chipmunk lair" isn't as exciting as finding a bobcat
den, but it might provide an easy way to photograph larger predators. I
can't predict what path the fox will take when he passes through that
stretch of woods, but as long as the chipmunk is actively using that
hole, there's a good chance the fox will swing by to investigate.

Posted by The Nashaway Trackers at 1:36 PM