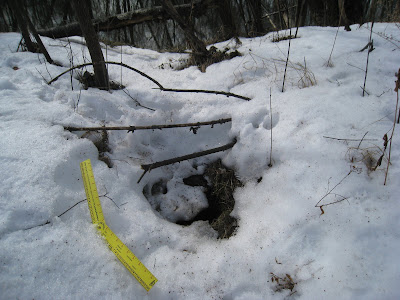 During Wednesday's walk at the Oxbow, Susan and Dan found evidence of deer, rabbit, otter, mink, mouse, and of course, the ubiquitous squirrel and beaver. We were baffled by some fisher-like tracks that seemed to begin at the water's edge. Were they actually those of an otter? No slides in evidence at that location. We were left scratching our heads on that one.

We do feel that we may have solved one mystery, though. We saw three or four melted-out tunnels similar to the one in the upper left of the photo - approximately four inches across, some going on for several feet, and all originating at water's edge or a hole leading to water. The tracks coming out of the hole, in the upper right of the photo, are clearly those of a mink. Do mink routinely use lengthy snow tunnels in the winter? I found quite a few references to mink tunnels on the internet. Could muskrat be involved? Maybe, though I couldn't find anything definitive about their use of snow tunnels. The other interesting thing about the scene captured in this photo was the presence of a single mussel shell at the hole entrance. It doesn't show up in the picture, but it was just inches away from the front of the hole. More evidence that mink are snarfing up those fine Nashua River mussels.
Posted by Susan at 12:21 PM