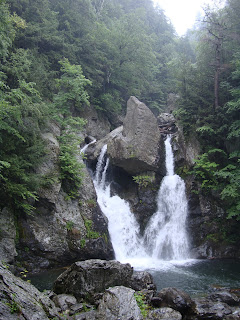 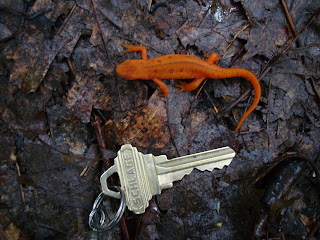 Lars spent the weekend in the Berkshires in Western Mass, in Mt Washington State Park. We went to see Bash Bish Falls and on the way down the trail found an immature Eastern Newt (both pictured above). From a USGS website:

The Eastern Newt, Notophthalmus viridescens, and its close relative the Striped Newt, N. perstriatus are unique in that they undergo two metamorphoses. The first is the usual transformation from aquatic, gilled larva to an air-breathing terrestrial form. However in these two species there is a second, less striking metamorphosis to a breeding aquatic adult. The sexually immature land phase is usually called an Eft. The Eft stage may last anywhere from 1-7 years. The skin of the Eft is toxic and their bright coloration serves as a warning - it is not so rare to find an Eft wandering about in broad daylight after rain.

It was in broad daylight in the rain. Good thing I didn't touch (or eat) it. 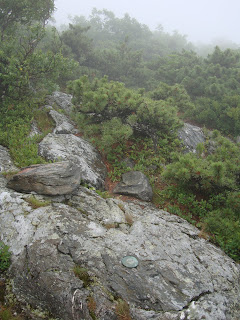 Then off to nearby Mt. Everett at 2,600 ft to find a community of dwarf pitch pines. This is a rare example of this type of old growth forest in New England. By core sampling studies, these trees range from 12 to 170 years old, despite most being less than 3 meters high. Other mixed, dwarfed hardwoods include Red Oak, Red Maple and Birch. What a beautiful place! It's a natural bonsai garden on the Appalachian Trail.
Posted by Lars at 11:02 PM