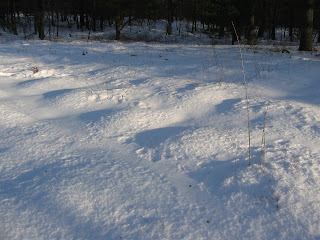 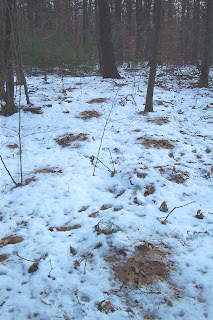 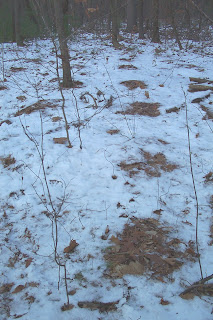 I have included photos from two different areas. These photos show historical evidence of Native American "corn hills." The first photo is from Sarah Doublet Forest (Littleton Conservation Trust, MA), which lies within the area of the original Nashobah Indian Praying Village. It was the sixth of seven areas in Massachusetts set aside in the late 1600s in an attempt to "Christianize" local Native Americans. Sarah Doublet was an American Indian thought to have started one of the earliest apple orchards in the area. One can still find Nagog Hill Orchards in this area, sitting between Fort Pond and Nagog Pond. These woods are beautiful.

The latter photos are from Estabrook Woods in Concord, MA, just behind (east of) Middlesex School. There has been a long struggle between conservationists and the school regarding the school's recent expansion for sports fields, because the corn hills lie so close to this area.

Here is an excerpt from an old article:
From American Anthropologist "Indian Corn-Hills in Massachusetts," Delabarre and Wilder, July 1920.

"Although the cultivation of corn (maize) by the aborigines of the West Indies was observed and reported by the earliest of the discoverers, probably Samuel de Champlain was the first to give any account of this form of agriculture in New England. His first recorded observation was made during his voyage of the summer of 1605, at or near what is now Saco, Maine, his "Choũacoet." He writes:

“The next day [July 9, 1605] Sieur de Monts and I landed to observe their tillage on the bank of the river [Saco river]. We saw their Indian corn, which they raise in gardens. Planting three or four kernels in one place, they then heap about it a quantity of earth with shells of the signoc before mentioned [the horseshoe crab, Limulus polyphemus]. Then three feet distant they plant as much more, and thus in succession. With this corn they put in each hill three or four Brazilian beans [the kidney bean, Phaseolus vulgaris], which are of different colors. When they grow up, they interlace with the corn, which reaches to the height of from five to six feet; and they keep the ground very free from weeds. We saw there many squashes, and pumpkins, and tobacco, which they likewise cultivate. The Indian corn which we saw was at that time about two feet high, some of it as high as three. The beans were beginning to flower, as also the pumpkins and squashes. They plant their corn in May, and gather it in September.” "

I thought you'd like pictures of snow with our impending heat wave. The snow accentuates these remnants of the land.