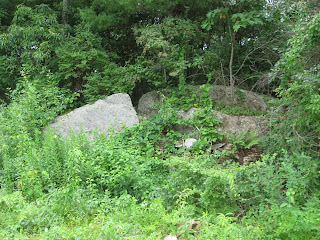 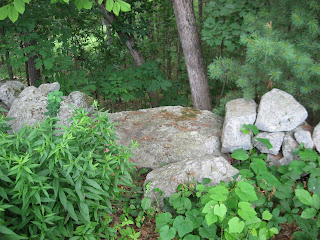 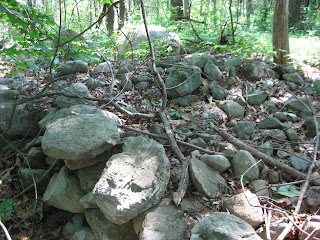 If Lars can post pictures of corn mounds, I figure I can post some
photos of rock piles. I hope the photos show up in the order I
intended. If so, the first two are from Half Moon Meadow in Boxborough,
and the 3rd is from Brown Woods in Framingham.

Half Moon Meadow a is several acre field with a stone wall around its
periphery. Both of the photos are of large, unusual stones within the
rock wall surrounding the meadow. If you stand on the stone slab in the
2nd photo, you are perfectly positioned to look across the field and
observe the solstice sunrise through the V shaped notch in the stone in
the 1st photo. This alignment has led to the idea that Half Moon Meadow
may be a sacred, ceremonial Native American site. However, the stones
are part of a stone wall, and we know that colonial farmers built many
miles of those. Were the stones carefully moved and aligned by Native
Americans and then left in place when the stone wall was built by
colonial farmers? Or did colonial farmers intentionally place them for
observation of the solstice sunrise? Or was one or both of them moved
by a glacier, with alignment occurring by chance? (A local geologist
confirmed that neither of them is bedrock: they were indeed moved, but
the mover could have been either human or glacial.)

Sacred or accidental? Consider that there are 250,000 miles of stone
walls in New England, and the position of the sunrise varies by only 50
degrees throughout the year. How improbable would it be for something
like this to occur by chance?

It has also been proposed that the Stone with the V shaped notch
represents a person or animal lying down. Hmm. And then there are the
mounds of small stones located outside the meadow, that have been said
to represent the turtle, an animal thought to be of religious
significance to Native Americans.

I did not get a good photo of the mounds outside of Half Moon Meadow so
I posted one from elsewhere The 3rd photo is a mound of small stones
from Brown Woods conservation area. As you can see, it is right up
against a stone wall. Piles like this can often be found near plots
that were once used as cropland. Tom Wessels suggests that farmers
removed even small stones from soil that was to be plowed every year, to
make it easier to turn the soil. These small stones were sometimes used
with larger ones to build walls, or simply tossed into piles in a corner
or edge of a stone wall, or some other out of the way place. To me,
this is a more appealing explanation for the piles of small stones
around Half Moon Meadow....But you never know...

Posted by The Nashaway Trackers at 10:40 PM