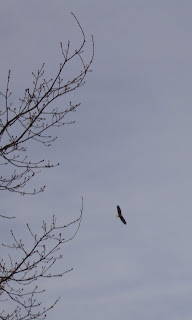 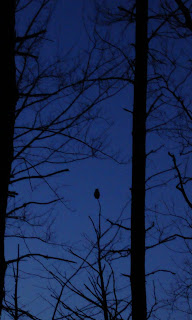 Three times in 10 days, Lars has now seen two (and heard a third) Great Horned Owls in the pine stands of the most northern portion of Delaney Complex in Stow. Last week, I followed an early morning Owl through the woods as it got chased by a group ("murder") of crows. I followed them as they chased the owl from tree to tree. On Xmas eve at about 5p, I spotted an owl, then saw it join a second owl, perched high in dead trees at the edge of the marsh. They were calling to a third across the marsh. I attempted stealth on crunchy snow, but one flew away. The other posed for a few snapshots, and then grew tired of my clumsy approach and left. Then yesterday, I came across the same crows and their relentless chasing of the owl. I followed them through the woods until the owl doubled back and I lost them. Is this the same pair I saw at the same location last winter?

Included is a chance encounter with a bald eagle seen on 12/21 while crossing the new stone bridge across the Sudbury River/Rt 117 in Lincoln/Sudbury. I've never seen one around here.
Posted by Lars at 12:09 PM