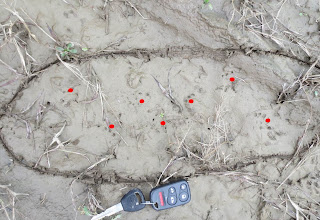 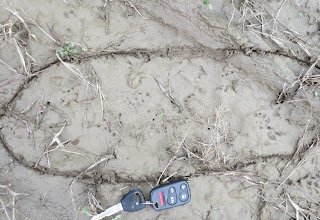 Still in the sand quarry, we were asked to identify the animal which
made the tracks. George pointed out how it was sort of an alternating
walking pattern, so in the 1st photo I added a red dot to each
front/hind pair, in case the alternating pattern doesn't jump out at
you. It didn't jump out at me. I included the same photo without the
red dots so you can see the tracks clearly. Well, as clearly as possible.

Looking at it now, I kind of think the animal traveled back and forth on
the trail, which is why it appears to be somewhat of a mess.

I don't think anyone in the group got this right, so if you know it,
you're a rock star tracker!
Posted by The Nashaway Trackers at 9:14 PM