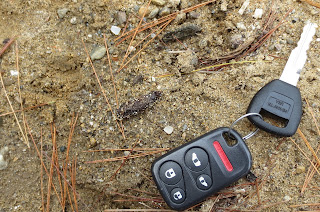 Yesterday I had the pleasure of attending a CyberTracker Evaluation
workshop in southwestern NH, with evaluator George Leoniak. With his
permission, I am going to share some of the exam questions. I'll try
posting the photos one by one as quiz questions, and hopefully some of
you will take a stab. I have about 10 I'd like to share and will keep
going as long as people are interested. Feel free to ask any questions
about the evaluation in general, as we go along.

For some background, I attended the 1-day eval, which was basically
pass/fail, with passing scores receiving a level 1 certificate. But if
you attend a 2-day eval, it's possible to get a level 2, 3, or 4,
depending on your score. The certification eval is described in more
detail here:
http://trackercertification.com/?page_id=84

We were not given any info about the testing location or types of
habitat, other than the fact that it was in southwestern NH. After
meeting in Keene, NH, we car pooled to a sand quarry and spent most of
the day tracking there, and then a little time in the woods near a wetland.

This first photo was in the sand quarry at the side of a sandy, gravelly
road. There did not appear to be any tracks associated with the small
dark thing in the center of the photo. The question was which animal
made that sign. Any takers?
Posted by The Nashaway Trackers at 6:38 PM