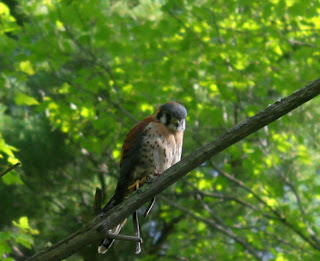 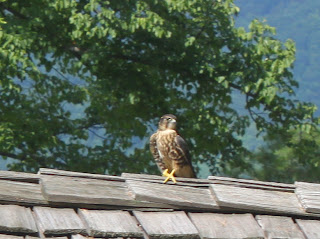 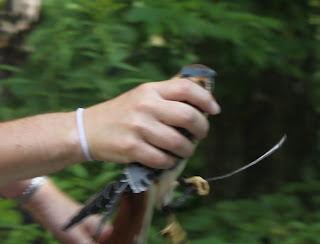 Janet writes: We just returned from an amazing family vacation in the
Adirondacks. In the comfort of a beautiful river front home, we fell
asleep each night and awoke each morning to the howling of wolves.
Ducks paddled right up to our kayaks, and, out in the yard, coming
within 10 feet of us, a merlin chased a kestrel which I held in my hand
after fear had immobilized it.

Unbelievable? All of that happened.....but we had to imagine that these
animals were wild. We rented a house just upstream from a wildlife
rehab center, where the howling wolves reside. It was fun to picture a
pack singing joyously to the moon after a fine cervid meal, but such
imaginings were sometimes interrupted by a woman yelling "no more
howling!"...And, so like dogs, the wolves would stop!

I fancied myself a duck whisperer, until we visited the rehab center,
and met a suspiciously similar looking pair of ducks who were so
friendly that I had to be careful not to step on them. They had just
been released, we were told, and keep coming back to the rehab center
looking for food.

The photos are from our final day. We were packing up the car, when I
spotted the kestrel on a branch about 20 feet above us. I was stunned
at how calm and still he was as I frantically snapped photo after photo,
expecting him to vanish at any moment. But then we remembered the rehab
center and noticed that something appeared to be wrong with one leg.
And then a wing didn't look quite right. And then we noticed the little
strap hanging from his leg. And so we were not surprised to see that
his flight wasn't quite normal when he made his way towards a shrub at
the side of the driveway. Initially, however, we were astonished to see
the merlin swoop towards the kestrel and pursue him among the trees.
The merlin gave up and flew up onto the house when the kestrel landed on
the ground a few feet away from us, trembling. I carried the poor
creature down to the rehab center and asked if they were missing a
kestrel. Indeed, he had slipped out that morning when someone went in
to clean his cage.

Finally, our excitement over a close encounter with a merlin was
deflated when the rehabber asked what kind of hawk it was that pursued
the little kestrel. "Was it him?" he asked, pointing to a merlin
perched on the top of his old cage. "We just released him a few days
ago, and he keeps coming back."

Posted by The Nashaway Trackers at 10:47 PM