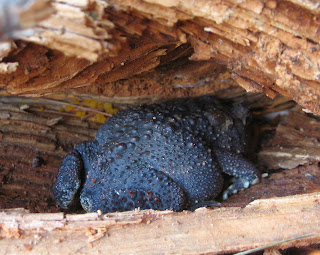 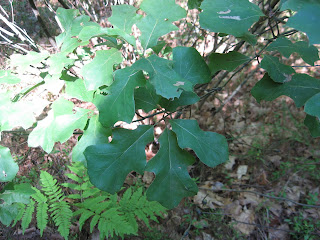 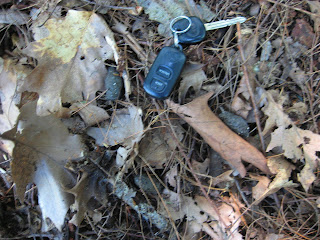 Some interesting finds today in the woods in Concord, MA.  Down at the edge of a swamp, I was pulling branches off of a large, rotting pine log, so I could get over it without impaling myself, when I realized I had destroyed someone's shelter.  I saw a small, dark blob move, and at first thought it was a rodent.  I was surprised to see that it was a toad!  Although the American toad (Bufo americanus), is usually some shade of brown, gray, or olive green, it can also be black (so I have read) .  I have not been able to determine how common this is, but I cannot find an online photo of a solid black one, so it must not be terribly common.

Several sources say that these toads are capable of changing color, in response to temperature, humidity, and stress level.  One experiment confirmed that the "stress" appears to be perceived predation risk: the toad changes color to match that of its surroundings in order to improve camouflage and reduce the predation risk.  Interestingly, younger toads are able to change color more quickly than their elders.  Older toads, which can change color only slowly, are more likely to seek an environment that matches its color.

The toad in the photo was large.  Did it turn black because it was in a cool, dark, moist shelter, or did it choose this shelter because it is black?  In any case, I put the branch back in place, to help keep its house cool, dark, and moist.

A bit further from the swamp, in the upland forest, there was a shrubby area dominated by clumps of scrub oak, Quercus ilicifolia.  I snapped a quick photo because this is only the second time I've ever seen it.  It is common on Cape Cod and in Plymouth County, but, as far as I know, it's not very common in most of the rest of Massachusetts.

Finally, I never would have noticed the 3 hawk pellets in the 3rd photo if my face hadn't come within 6 inches of them.  That would be one of the few benefits of having the grace and athleticism of a clod.

Posted by The Nashaway Trackers at 11:15 PM