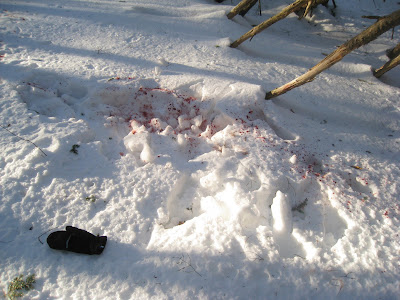 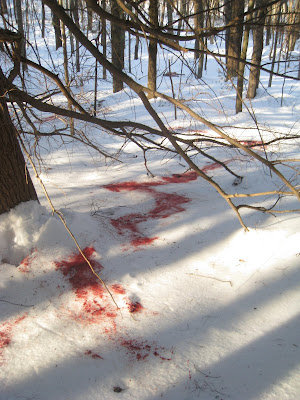 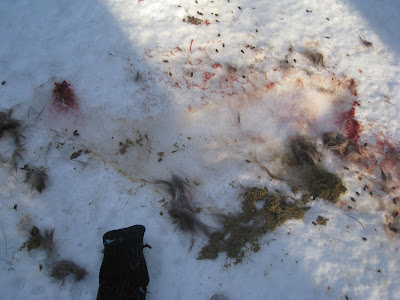 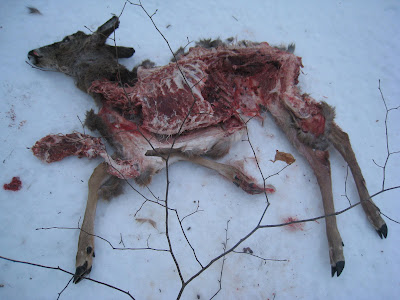 After learning about a recent deer kill by coyotes, I went out this morning to investigate. The following is my take on the event.

The first photo shows the attack site, which was on a rise among a grove of mature hemlocks. I'm guessing the deer was bedded down.

The next picture shows the bloody path of the deer as it was being dragged down the hill. (You can make out the carcass below.)

The third shot shows where the deer was initially left, but before it was fed upon. You have to look closely to see there's an actual melted impression of the still-warm animal in the snow.

The final photo is of the deer itself. It had been dragged further downhill and its stomach had been removed. (It was still largely intact, but had been taken some distance from the carcass.)

The person whose property this is on stated that last night sounded like something out of a zombie movie. Besides coyote howling, there was much growling and bone-crunching to be heard.

In addition to the coyotes seen at the site, a red fox was spotted there this morning. I set up my motion-detecting camera and hope to get some photos of the various mammals that come to dine.
Posted by Susan at 11:15 AM