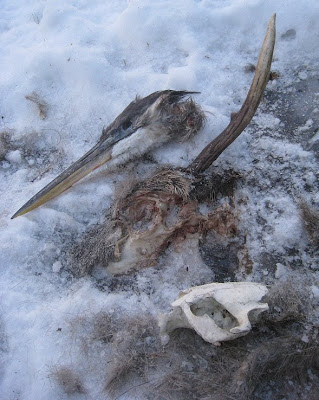 A handful of the Nashaway Trackers took a look around the Phillips Conservation Area today. Though conditions were far from perfect, we saw some interesting stuff. It's clear that deer are abundant there, and though we were disappointed not to find any porcupine sign, we lucked out when we happened upon some decent bobcat tracks. Most interestingly though, we found a deer kill site where the young buck was partially consumed, with much of his body frozen in the ice at the edge of a small pond. Only half of his head was exposed, showing one antler and an empty eye socket. We later came across a large rodent-type skull (more on that after a little research is done), as well as the wing and head of a great blue heron. For your viewing pleasure, attached is a photo of the aforementioned heads.
Posted by Susan at 5:23 PM