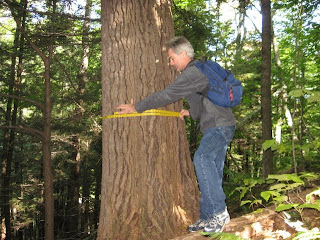 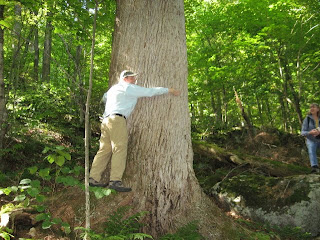 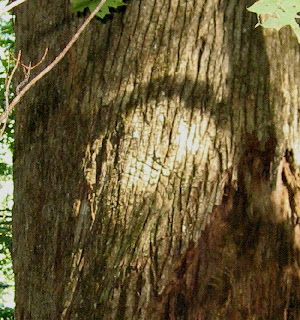 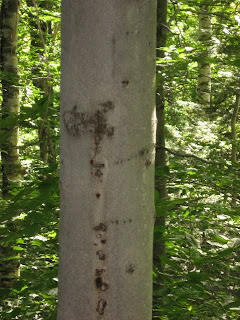 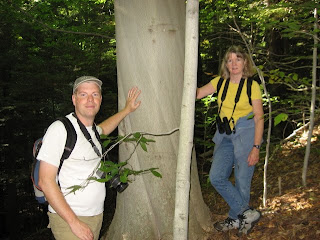 Michael, Sue, Susan, Dan, and Janet followed the suggested hike in
Kershner and Leverett's Ancient Forests of the Northeast. Photos above
show the highlights. Michael has the measuring tape around the champion
large-toothed aspen, with a diameter of around 29 inches. Note the
thick, furrowed brown bark on the trunk. We had to look high into the
canopy with binocs to see the branches with the thin, greenish-white
bark characteristic of younger growth, and the characteristic leaves.
There were quite a few other large aspens scattered throughout the
forest, but this was the largest we found.

The presence of these huge specimens of aspen, typically a short lived
pioneer species, must be very telling about the disturbance history of
this forest...but I am not exactly sure what that is. I wish we had
looked more carefully for evidence of past disturbance.

Dan is hugging a champion white ash, over 4 ft in diameter, which we
were excited to find. But the real bonus is pictured in the close-up.
The scratch marks appear to be those of black bear. There were a series
of those going up the tree.

Also pictured is a beech tree with a series of horizontalish lines of
dots going up the tree. These are not the picture perfect bear claw
marks we've seen in books, but we wonder if maybe they are those of a
smaller, lighter bear which did not leave deep or consistent
impressions....or maybe just part of the beech bark disease lesions...

Susan and Dan stand beside the largest, cleanest beech I've ever seen.
What a beautiful specimen. Must have borne loads of beechnuts in years
past. Why no clawmarks?

We were lucky to find these giants - we did have a guide, but of course
the trees are not labeled, and finding them took all 5 pairs of eyes.
Many other interesting trees, mosses, ferns and mushrooms entertained us
on this perfect weather day.

Posted by The Nashaway Trackers at 4:14 PM