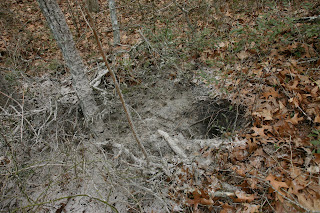 Lydia and Dan spent a cold, overcast day tracking in the dunes along
Horseneck Beach, near the MA/RI border. Coyote tracks were everywhere
in the dunes and along the edges of the parking lots. At one of the
summer parking areas, we found a large puddle ringed with wet sand,
which had recorded perfect deer and coyote tracks. Dan made some
plaster casts of the front and hind feet of coyote.

We followed an old dirt road, on which we discovered domestic cat
prints as well as skunk, and then bushwhacked back toward the beach.
Following a deer path through the woods, we came across a disturbed
area on the side of a small hill, where sand had been flung out of the
hillside and coated a nearby tree. We initially thought we were
looking at a coyote den, but the digging stopped a foot or two into
the hill - there was no actual den cavity. Perhaps the coyote was
trying to dig out another animal, or perhaps this WAS a den
excavation, but the coyote changed his mind upon encountering some
obstacle. Whatever it was, there was sand flung out all over the
place, reaching five feet up the tree and scattered down the slope.

The hole itself measured about 15 inches across and extended down at a
sharp angle into the hill.
Here's a link to another coyote den on Cape Cod:
http://www.capelinks.com/cape-cod/photos/detail/40/

We had expected to see red fox tracks, but didn't find a single one
today. What we did find was a complete red fox carcass, decomposing
in the dunes just a few feet away from one of the parking areas. Its
mouth was slightly open, and we were surprised at how good its teeth
looked - white and shiny with no wear or plaque.

On another part of the dunes we stumbled into bunny heaven, startling
a rabbit that zig-zagged off at high speed. We spent some time
studying the tracks it left in its escape. We literally watched the
tracks age - grains of sand fell back into the track and within five
minutes the track had lost a surprising amount of detail.

Rabbits had been browsing on beach plum, nipping each branch at 45
degrees. (We would have been happy had the temperatures reached 45
degrees!) We found several places where rabbits had hopped along a
dune path, and then turned and sat to nibble, leaving clear prints of
their hind legs in the sand. Dan got to see individual toe
impressions in some of the tracks, and could have easily mistaken a
single rabbit foot print as canine or feline without the distinctive
2-1-1 trail pattern. (That fleeing bunny, by the way, left serious
nail marks in the sand as he motored up the hill away from us).

We ventured out into the wind at the end of the trip to track
shorebirds and seagulls, and to compare the various gaits used by
dogs running free on wet beach sand.

So what didn't we see at Horseneck? No raccoon and no red fox
(although we found raccoon scat and probably fox scat). No opossum.
Only one set of skunk tracks. We suspect that as it gets warmer we'll
start seeing additional animals using the dunes.

Posted by The Nashaway Trackers at 6:17 PM