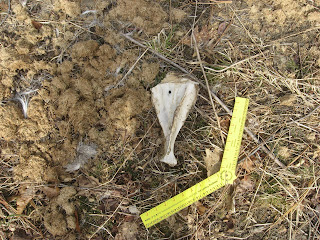 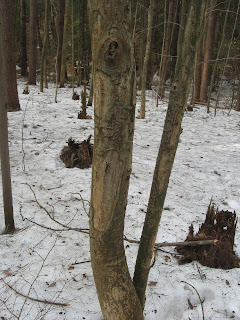 Susan and I (Janet) enjoyed an exhilarating hike amongst towering white
pines, majestic hemlocks, and various hardwoods of awe inspiring girth,
which grace the old growth of Mohawk Trail State Forest. The spongy
moss covered forest floor with its pits and mounds and lovely nurse logs
whispered memories of precolonial splendor beneath our feet.

A week or 2 behind Central MA, the Mohawk woods still wear a few patches
of snow and ice, though not many tracks were distinct. We focused
instead on other sign. along the Deerfield River, the remains of a deer
carcass recall the harshness of winter (photo shows deer hair, scapula,
and woody stomach contents). Nearby, the oozing black birch of beaver
artistry harbingers the freshness of spring.

Some 6-8 inch diameter striped maples (large for this species) bear
puzzling sign (see photo). These marks, rather old, began 1-2 ft off
the ground, and were as high as about 5 ft. While striped maple is a
favorite of moose, I have never seen moose barking as low as 2 ft, nor
did we find any clear evidence of moose (no scat, tracks, or
walkovers). Perhaps this was old deer barking or deer rubs, with the
higher marks made by deer on snow pack? Other ideas?

On the trails were various carnivore droppings; most were probably
coyote. The most eye catching was a foxy looking scat carefully placed
on a small pine twig. The fox;s skill and consistency in depositing its
scat in the most noticeable locations never ceases to amaze me.

We ascended a steep hillside of boulders, Susan with enviable ease and
precision. On this slope, but not within the cliffy refugia, was a
segmented, untwisted, blunt-ended scat of fur and small bone fragments.
Bobcat?

Perhpas the most curious in terms of animal sign, was what we did not
see. No porcupine scat, fresh or old, within the many suitable den
sites around the boulders. Nor could we find any evidence of porcpine
feeding on the hemlocks. In a patch of snow, we did find a few tracks
that might have been porcupine, but that was all. This is habitat is
similar to that at Quabbbin, where porcupines are abundant. Are
porcupines controlled in State Forests, I wonder, because of the
"damage" they do to trees?

Another notable absence was black bear sign. these are reportedly
present (even common) in that area. Yet, we found no climbing marks on
any of those huge, beautiful beeches, no bite marks or claw marks on the
white birches or red pines. Puzzling. Maybe there are just too many
picnic baskets to raid, and campsites to mark.

Posted by The Nashaway Trackers at 10:18 PM