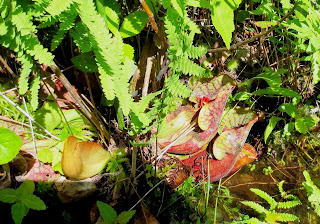 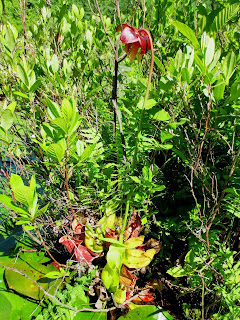 From Welch Pond Bog in Bolton, MA. The first photo shows a rosette of pitcher plant leaves, which are fused to form a water holding vessel (the pitchers). The bright red venation and nectar glands on these leaves attract insect prey, and the downward pointing hairs on the insides of the leaves encourage descent of prey into the depths, where they are digested. Like other carnivorous plants, the pitcher plant does photosynthesize, and carnivory is not required for its survival. It does, however, help the plant grow larger and reproduce better.

I've read that coloration is determined by sun exposure, with greater sun exposure resulting in more red and shadier conditions resulting in more green. But that cannot be the whole story, because some rosettes had both red and green pitchers. Perhaps age of leaf matters. In this rosette, the younger looking leaf on the left is greener.

The second photo shows a blooming pitcher plant rosette. This one also has both red and green leaves. Pollination by insects is required for reproduction, which would seem to put the plant in an interesting bind. Are the insect species which pollinate this plant also attracted to the pitchers, or do they avoid them for some reason. It doesn't seem to be a good idea to kill your pollinating resources, but I suppose we humans do that too, and we've been pretty successful. Perhaps it's a good thing the pitcher plant does not reproduce well without eating insects. If it eats too many insects then it won't reproduce as well, resulting in fewer pitcher plants and recovering local insect populations.

-Janet
Posted by The Nashaway Trackers at 9:58 AM