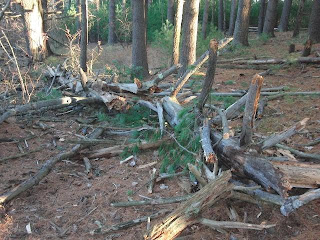 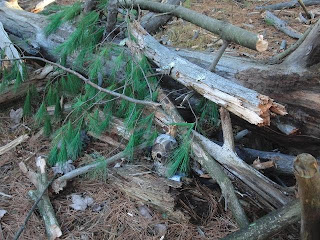 Dan writes:
I went to check on the group's motion-sensing wildlife camera last
night, and got quite a surprise. As I approached the camera trap
location on the edge of a wetland, something seemed off. It took me a
second to realize that there was a 50 ft white pine trunk where the
camera used to be!

Apparently that tremendous wind storm that followed the latest rain
system snapped off the top 50 feet of a huge white pine, and sent it
crashing down across my camera setup. Amazingly, the trunk only grazed
the stump that I had attached the camera to, angling it slightly
downward. After I cleared off a branch and righted the camera, it
dutifully took my picture.

This is actually the second bullet this little camera has dodged
recently. I got a call last week from someone who stumbled upon the
camera in the woods and called the number on the little card I always
leave explaining the project. Thankfully he called, rather than walking
off with the camera.

Hunters talk of cameras being mauled by inquisitive bears, and I've had
two camera housings destroyed by fisher over the years. Floodwaters
take out cameras each year in the South. Elephants stomp them in the
East. This may be the first documented evidence of a tree attacking a
wildlife camera, however.

I can't decide whether this camera is lucky or cursed. In any case, the
little guy has used up two of his nine lives.

Posted by The Nashaway Trackers at 8:53 AM