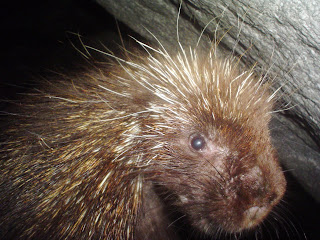 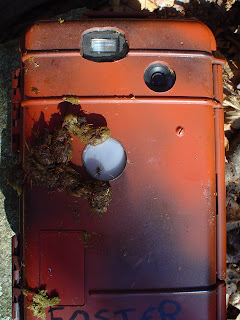 On a sunny Sunday, Jori and Dan retrieved three cameras that Janet and
Dan had placed near some porcupine dens in the Quabbin area some five
weeks earlier. Two of the cameras were on a rocky cliff where numerous
porcupines hole up for the winter. The third camera was at a ground den
- a simple hole in the ground a few yards away from a small stream.

All three cameras were dry on recovery, but each had some amount of
trouble over the last month. One took several hundred photos of falling
snow, perhaps swaying back and forth in a high wind because it wasn't
mounted to a sturdy-enough shrub. The second was found face-down in a
pile of porcupine scat, with fresh scat and quill marks all over it. It
never got a chance to take a single photo. (Note to self, bring a
plastic bag to put soiled cameras in next time!)
The final camera held up well for the first 4 weeks, but in the last few
days a porcupine decided to cuddle with it and twisted it around to take
photos of a rock.

I've got about 500 photos to sort through, although the number of
keepers is going to be very low. In the rocks, most of the photos are
of tails or sides, with very few well-posed critters. Unlike most
animals, the slow-moving porcupines barely seem to get in the frame
before the camera fires. Out at the ground den, the white snow sucked
up most of the flash, leaving an under-exposed dark-brown porcupine in
the upper corner. I'll post some more photos once I've had a chance to
fix the exposures.

I'm also going to try to graph activity vs. time of day, and see if
there's been any shift in activity as winter turns to spring. Get your
predictions in now! (You can also try guessing what other animals
showed up in these dens.)

Posted by The Nashaway Trackers at 8:45 AM