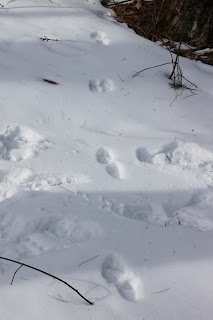 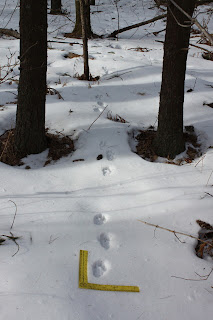 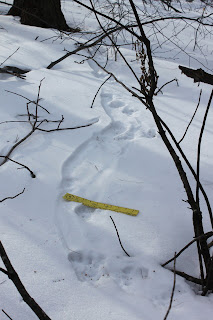 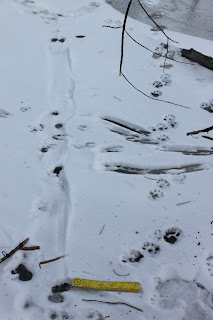 Otters are said to "slide downhill most of the time", and uphill only
"occasionally", so those at Vaughn Hills last week must have taken great
pains to through off trackers.

In fact, on that particular day, they decided to do more uphill than
downhill sliding. One photo shows some uphill sliding - you can see that
the animal had to frequently propel itself forward with its feet in
order to keep moving. There was quite a bit of downhill loping, even on
steep slopes.

On the ice, the otter on the right chose to lope, while the one on the
left slid. (The narrow slides going perpendicular to the otters'
direction of travel were made by the slipping hooves of a deer as it
crossed the frozen stream.) Most of the slides I found that day were
short, and on flat ice.

There was a stretch of 9 consecutive steps of 2-2 bounding, the first
time I've seen an otter use that gait with virtually perfect registration.

One thing that has been fairly consistent, at least in my experience so
far, is the tight grouping of tracks. You can see that discrete
grouping in the photos above. Sometimes the tracks within a group did
spread out, but not often to the point where it was difficult to
distinguish separate groups (which does often happens in fisher trails).

Why did they do so much downhill loping? I don't know, but the tracks
are kind of small for otter, so maybe they were young ones playfully
goofing around, and/or maybe they had been eating well, and did not have
to worry about moving efficiently to conserve energy.

Posted by The Nashaway Trackers at 11:50 AM