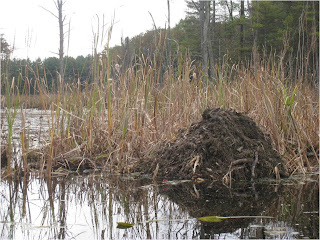 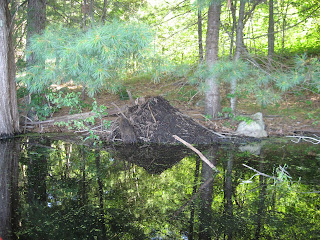 The photos show two different mounds found by Dan, Susan, and Janet
while kayaking. We found the one amongst the grasses last fall and
thought (or at least I did) that it was a muskrat lodge. The mound was
about 2 ft tall, and about 4 ft wide at water level. It seemed too
small for a beaver lodge, and the smallish sticks did not appear to be
beaver cut. It seemed too large for a beaver scent mound. So, we
decided it was probably a muskrat lodge. However, muskrat lodges are
said to consist of largely of grasses and reeds, without so much mud and
sticks....so, the diagnosis of muskrat lodge always bothered me a little.

The picture with the pine branches hanging over, taken 8/8/09, shows
(I'm pretty sure) a large beaver scent mound. It is about 18 inches
high. Note that while shaped a little differently, it consists of the
same materials as the larger mound.

So is that larger mound a gargantuan beaver scent mound? Or is it the
top of a small beaver lodge, that happens to be made mostly of mud and
woody debris that the beavers found and did not have to cut? Or were we
correct first time around, with muskrat lodge?

Posted by The Nashaway Trackers at 2:28 PM