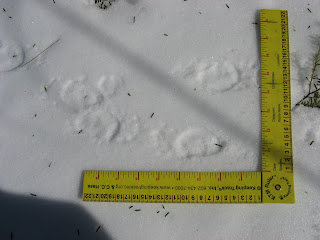 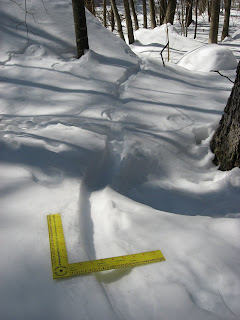 As Dan said, the mink slides were impressive - I (Janet) couldn't resist
adding one of my own photos. I've never before seen minks slides longer
than a couple of body lengths.

The other picture is of porcupine tracks. Because they tend to use the
same runs repeatedly, you don't often see individual tracks, so this was
a bit of a treat.

The bobcat tracks were interesting - I don't have a good photo of the
bounding pattern, but I had the impression it was bounding through open
areas, as if it didn't like to feel exposed. Typically, (at least in my
own experience), they accelerate to a trot to traverse open areas, and
slow to a walk when they reach cover. Is trotting more difficult than
bounding in deep, powdery snow?

Another notable tidbit is that the bobcat did not leave the hill top.
The tracks emerged from the cliffs, presumably where the the cat dens,
traveled to several lookouts where it sat and considered the landscape,
but then circled back to the cliffs, as if the animal had decided to
make do with the wee-beasties of the hilltop, rather than struggle
through the snow for a nice, big hare. This reminded of my own cats,
who make many trips to the door on winter days, but turn around in
disappointment after a long, thoughtful viewing of the snow.

We also found a trail of fisher tracks coursing through the area, the
first I've seen of fisher in this particular area.

On our way out, we visited the overturned tree that I mentioned in my
summary of my last trip this area, and placed the camera there.

Posted by The Nashaway Trackers at 9:53 PM